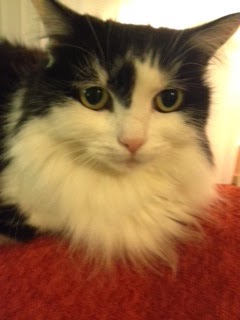 Dear George,
So what is all this festive nonsense about ? Don't get me wrong , I love the fact there are sparkly shiny things to play with . The humans however are more mental than normal . They consume vast quantities of Turkey and Brussels sprouts . They have the nerve to blame me for the resulting flatulence .
They fall asleep on my sofa in silly paper hats .  No Cat nap for me with all this loud snoring going on My favourite rug is covered with wrapping paper . How very dare these humans rip and tear it  to shreds when I wasn't allowed to ? Thank goodness it's only once a year .
Yours
Penny

Dear Penny,
Couldn't agree more. My human has been far more mental than normal. She has eaten like a pig and, as you say, Brussel sprouts are not conducive to a pleasant home smelling mainly of cat.
Personally I like a nice daily routine. Wake human at 7am or perhaps 6.30am if I want an early breakfast. I usually walk up and down her body but if she is sleeping too soundly, I will purr in her ear or just push things off the bedside cabinet. Breakfast at 7.10 when she has gone downstairs in her dressing gown and opened the envelope of cat food.Toilet time outside followed by a stroll round the garden in good weather, then a little nap usually on the bed but maybe on the windowsill if it is sunny there. Lunch - a few cat biscuits. Another nap, occasionally accompanied by my human. Tea - a few more cat biscuits. Another nap followed by an evening stroll. Supper - proper serving of cat biscuits. Then I sleep in front of the fire, following her up to bed at night (one or two more cat biscuits). I like to sleep on the warm side or in very bad weather cuddled up close to my human hot water bottle.
That's it. No alcohol in the house. No silly hats. No visiting humans. No going out in the evening (I mean her not me).  Just a nice daily routine with an attending human.
Happy New Year.
George
Posted by George Online Cat at 7:47 am 5 comments: 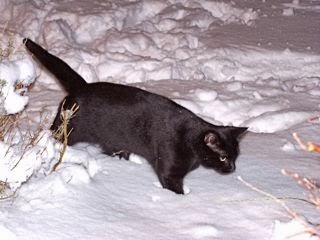 Dear Readers,
It's Christmas again. That time of year when humans are particularly irrresponsible and try to dress us up in Santa hats, tied tinsel round our necks or think it is funny to offer us champagne. Do not, I repeat, do not co-operate with any of this. It's downright dangerous to eat Santa hats, tinsel or drink alcohol. I know of a Siamese (not Miss Ruby Foo next door) who drank some champagne from a mantlepiece glass, got dizzy and fell off the mantelpiece and broke her leg.
My advice to you is to find a warm corner in the spare room and avoid most of the festivities. There is one exception. Turkey. Good cooks start cooking this early in the day and there may be interesting bits of skin or gristle thrown away at the start. Pull down the trash can and have a look inside.
Just before lunchtime, this huge bird is usually taken out of the oven and put on a kitchen surface while your human makes gravy, checks on the roast potatoes and puts on the sprouts. While a raw sprout makes quite a good toy for the kitchen floor, the cooked ones are of no interest.
Focus on that turkey. This is the one moment in an otherwise unpleasantly human-filled day, when they may be so distracted they do not notice your presence on the table or kitchen counter. If this is so, get stuck in. There's something called the Pope's nose on the back of the bird which you might be able to tear off and run off with.
The second chance of turkey occurs later when they have finished eating that course, and the dirty plates are set aside. Then greedy humans eat a Christmas pudding, and it is while they are busy with this, that you may be able to help clean the plates.
Snow? Well there's talk of it this Christmas so I am illustrating this blog with some snow filled photos. Personally I like a little stroll in the snow after the Christmas dinner, but only a short excursion. It's too cold to be left outside too long.
I want to thank Fluffy for her contributions this year, and also to mention Blossom, a kitten currently taking up space in my house. She was born on the street, just like a famous human who was born in a manger. She was picked up starving and is still nervous of strange humans. She wants to adopt a kind patient human who can give her a quiet home in 2014. That's her on the right .
Happy Christmas all you cats out there
George.
Posted by George Online Cat at 10:33 am 3 comments: