Cats and the Easter bunny 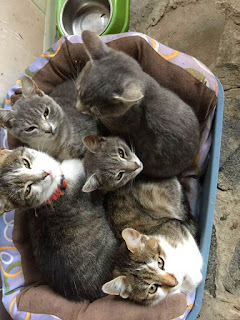 Dear George,
I’m in talks with some friends and family (as you can see in the photo attached – I’m the one with the red collar) to form a trade union or a labor union as it is called in the USA! After my humans’ deceiving behaviour last week I decided to protect my group’s members’ interests and improving wages in the form of more treats/steaks per capita, hours of sleeping to be extended to 18 hours per day and better sleeping conditions that absolutely require master bedrooms to be available to us non-stop!
Even if it really doesn’t matter what we do for a living, there’s a union with members who do the same thing. You might wonder what is our specific “trade” or skills that I want to protect. Well, one thing for sure is hunting. We are born hunters! So why are the humans trying to stop us from doing what comes naturally for us? If I catch a little bird or a little mouse my Mom is screaming out loud as she’s trying to get my prey out of my mouth! Phew! Unbelievable!
And the last deceiving act of my humans? They brought home a chocolate bunny and few chocolate chicks! This is not fair at all! Cats do not eat chocolate yet my Mom is telling me that we should have compassion and only eat fake bunnies! Really? What about the turkey she eats? Or that roasted beef?
You know what George? I’m having second thoughts - I want back that little bunny I hunted few days ago that she made me let go free! Very upsetting!  Anyway, wishing all cats & their humans:

A Happy Easter and a juicy roast!
Tommy

Dear Tommy,
The sheer hypocrisy of humans never fails to astound me! They sit down and gorge themselves on meat - beef, lamb, chicken, turkey, even pheasant. Here in the UK there are human hunters who shoot bunnies.  But when we bring in a simple little mouse for our dinner, they try to take it off us.
The height of hypocrisy are humans who pursue foxes with a whole pack of dogs. They kill the fox and do not eat it. Yet when we play with mice, they condemn us for doing this before or without eating our prey. They are blind to their own faults and unfailingly critical of us when we behave like they do. They really have no moral compass.
A feline trades union? It probably won't work, Tommy. And don't be tempted by that chocolate bunny. Chocolate can kill cats. Just keep on hunting the real thing and stop bringing them home! I suggest finishing it off and eating it quietly just the other side of the cat flap or underneath a nearby bush in the garden where she cannot see you.
Enjoy your meal.
Yours
George 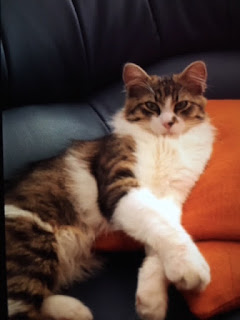 Dear George,
I’m really pissed at humans! Just because they are incapable to understand us they think they have the right to call us “psychopaths”? How do they dare to judge us based on a human mental disorder? I came across this article (https://www.theatlantic.com/science/archive/2019/02/cat-psychopaths/583192/) and I could not believe what I was reading nor could I believe that someone created a survey to find out why people think cats are psychopaths! I have to say one thing: if they truly think we are then, this is because of them! We mirror humans! How about this
George, what’s your take on this? Did we so miserable fail in training humans?
Bijou

Dear Bijou,
It is one of the worst side effects of our campaign for world domination. We have almost completely taken over the internet but we have failed to train our staff (video producers and marketing people) sufficiently. They will post stuff that is offensive to cats because they are blind to reading our body language.
Humans don't understand us. They keep comparing us to dogs - comparing like to unlike. It's not fair and it's not clever. I have booked my human into a TV programme with the ridiculous name of Psycho Kitties. I have instructed her to do her best to put the cat's point of view. It will probably be edited out anyway, but at least we will have tried....
Humans are psychopaths - the ones that neglect, kick, torture or kill cats. Cats are just cats - a species with their own wonderful behaviour.
Yours
George
PS. In the afterlife they will have to explain themselves to the Big Cat in the Sky. She has claws as well as soft paws.