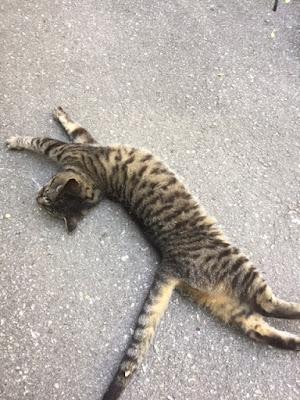 Dear George,
Last night I’ve got up (after a longer nap) to get my night time treats and there was no movement around. The silence was quite unusual and a bit unbearable! Hmm? Where was my mommy? I knew she was somewhere in the house; was she asleep? So I started moving slowly and quietly and there she was….in the stillness of the night…she was watching a video! But, mind you, not your regular video - I mean music or something!
In this video there was a woman explaining some exercises that my mommy was supposed to follow! That caught my interest so I joined my human to watch it!
George, you won’t believe this! The first exercise was about “stretching out one’s arms and rotating/spinning clockwise (apparently very important) like a dog chasing its tail until one gets dizzy! At least, I got dizzy just by watching it and honestly I think I’ve passed out! By the time I’ve regained my consciousness the woman in the video was bent forward in something that was called “downward dog”! What? I know most people behave like dogs …that’s why they are their best friends! They chase their tails, don’t know when to stop eating, looking at you with those big eyes full of loyalty and adoration and most of the time…barking at the wrong tree! Yes, most people but ….not my mommy! George, I have to save my mommy! I don’t want her to do all these nonsense dog exercises! I want her to behave like a cat: napping, relaxing, eating little but good and performing purrfect and elegant stretches (look at my picture attached)!
Now, how do I do this?
Uma 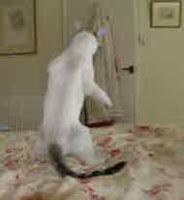 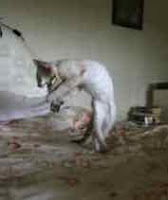 Canine type exercises (with all that bottom sniffing and tail wagging) are definitely not ideal for humans. They should be doing cat yoga instead. There are also some very nice feline yoga poses to be found here. If humans imitated some of our more common poses, and cultivated inner feline serenity, they would be much healthier and happier.
I recommend that you join her during her exercise routine and see if you can entice her to imitate your behaviour. If you start by imitating some of her behaviours, you will catch her attention. Once she is watching, then take the initiative and do some interesting poses for her. Ziggy volunteered to help me by doing some of his more athletic poses for the camera - just to give you a few ideas. 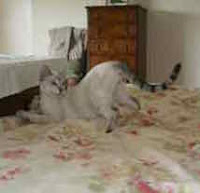 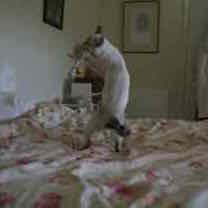 If she continues to watch silly videos suggesting dog behaviour for humans just insert your body between her and the screen and blank it out. We can't have humans imitating dogs. It is just too humiliating for us and for them.
Yours
George!
PS. And let us not forget the feline revolutionary asana (below)