Are you suffering from whisker fatigue? 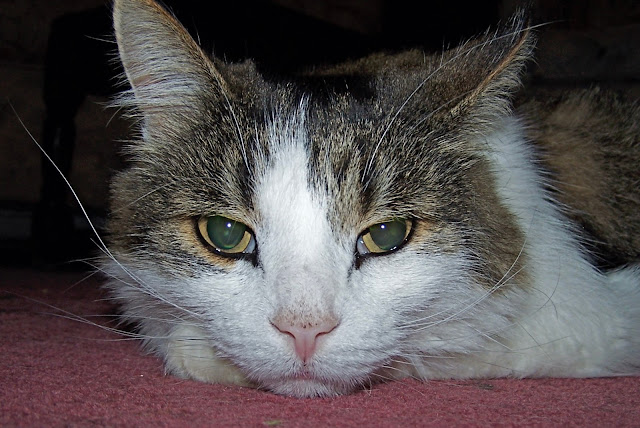 It's not generally known but we cats can suffer from whisker fatique. These wonderful strong hairs (so much more mobile and sensitive than the human beard) take important messages to the brain. And if they are over-stimulated they get tired.

Tired of what? Tired of being pushed out of place each time we eat or drink. In the real world this rarely happens. While we are drinking from a stream or a puddle our whiskers are not confined. When we are eating a mouse, we move the whiskers to where we want them to be - backwards if they are getting in the way of crunching up the rodent or forward to monitor its movement if our meal is still wriggling.

Humans don't get this at all. So they purrsist in putting our food in high sided bowls. We have to push our faces down to eat, and our whiskers are twanging and brushing against the side of the bowl. The same thing happens with bowls of water particularly if the water level is low.

Sensitive cats with sensitive whiskers dislike this. Does whisker fatique hurt us? Not normally, but it is unpleasant and sometimes even stressful.

So get your humans to give you shallow food bowls and water bowls large enough for our whiskers not to touch the sides. There is a vet article about this here. 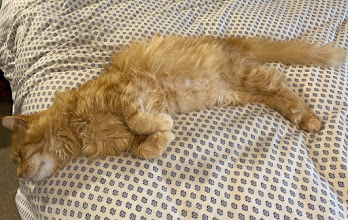 Shedding. It's what I and other cats do. Some of us, living in centrally heated homes, shed a little at a time. Those of us living outside shed in the spring, getting rid of spare hair ready for the hot weather. 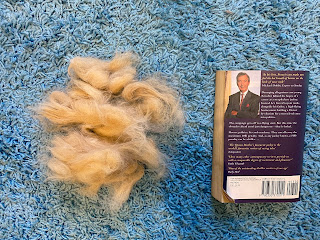 My friend, Toby, however, decided to do a big full-on shed just after Christmas. As you can see he has sort of wispy hair which is described as "semi-long hair." Just before the coldest time in the UK, the first and second week in January, he shed much of his coat - photographed here.

He's trained his human to brush him daily, when he lies down and exposes his tummy for the flea comb. In the course of these four post Christmas days, this is what she combed out. Had she been more conscientious (humans always try to avoid work) she might have combed out even more.

I asked him why? He said that he was trying to regain the natural life of his ancestors, Felis silvestris catus, when they first moved in with humans living in the Middle East.  January, he explained, is quite warm in Baghdad, the so called Fertile Crescent when during the first Neolithic settlements cats domesticated humans.

He added that he wanted to test his human's combing ability, which he admitted was not bad...