Vaccines - do they hurt? Why bother?

Dear George,
I need your help in finding the magic word that will make my human jump out of my box! It all started few days ago as a game - I was sleeping in the box when I heard “peekaboo”. I must admit it took me by surprise and I jumped out of the box only to find my human laughing out loud! OK! I meowed back “peekaboo” and ….quite like by “magic”….he jumped into the box. I meowed again peekaboo but no response! I tried to push him out of the box as you can see in the photo attached but no reaction! I don’t know if he fell asleep there but now I worry he might take residence of my box. How do I get him out? What is the magic word? Cat Scan? I tried it with no results? Oh! By the way, my human will soon become a medical doctor! George, I want my box back!

Dear Leo,
Human-kittens are always so amusing! So sad that they have to grow up to be slow and serious rather than playful like us. Soon he won't want to jump into that box!  So enjoy those precious moments while he is still young enough to play like a proper kitten.
We felines know that boxes are awesome playthings. Nice to jump into. Nice to jump out of. But humans lose that creative playfulness. They just think boxes are boxes. Poor things.
So think outside the box, and encourage him to stay inside it. Or maybe you could lure him out by pretending his favourite soft toy is a mouse.
Or just jump in with him! It will give him a bit of a surprise, as you land on his head!
Yours
George.
Posted by George Online Cat at 7:50 pm 2 comments:

Halloween and cats.... Guy Fawkes day ... a nightmare for cats. 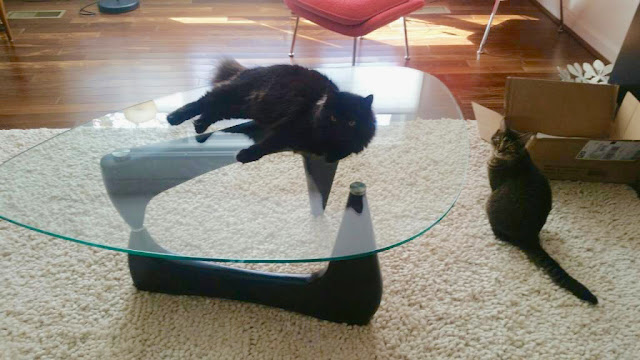