No blog this week. My secretary is unavailable. 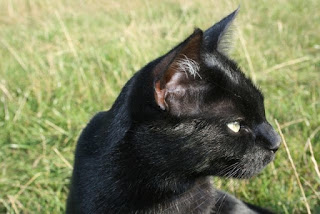 The household is in a mess. People keep coming and going. There's a weird sort of suitcase breathing and pumping oxygen. One of my human pets is very ill but they don't seem able to end it for him. It is a pity humans don't have proper vets. I hate vets but they have their uses when our health fails completely. Celia, my secretary, is therefore too busy to help me write this blog this weekend. So I have merely uploaded this photo of my profile just to share my handsome good looks with other cats.
Posted by George Online Cat at 6:41 pm 3 comments: