Emergency - a vicious kitten and a sadly demented human 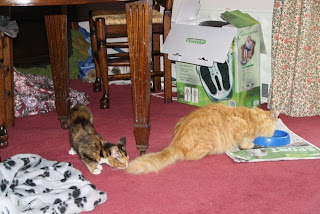 Dear George,
My household is completely upset by this small tortoiseshell and white kitten who has the impertinence to harass me.
When she first arrived, it wasn't too bad. She was kept in quarantine with an infection so I just lost one room of my territory. Then she expanded her territory into a second room. As the weather has been fine that wasn't too bad either. I spent a lot of time out.
But the other day I slipped in after my human just to check out the possibilities of a second meal (found a few fragments as you can see). At first she just sniffed me then she started biffing me. She ran up and down the room landing small kitten punches as she passed.
It was very upsetting. I had to get the human to let me out. Me who is five times her size had to retreat. How can I get rid of her? She is a rescue foster kitten, but it is me who needs rescuing.
Yours,
Toby, Disgusted of Ringwood.

Dear Toby,
You have a problem and that problem is not the kitten, but your pet human. If she is moving into rescuing kittens, your home won't be your own again. Humans with a pathological rescue tendency fill the home with rescued cats. Sometime, when this human psychological condition gets too overwhelming, the place becomes a death trap - scores of cats, disease, and not enough litter trays.
Act now and act firmly. I suggest you spray along the door which opens into the kittens room. This should get a message to your human that you do not want the intruder in your life. If you do get into the room, do not let food distract you, biff back. You should be able to fight off a kitten without using your claws. Use your weight instead.
If you are lucky, this will be a temporary aberration and the kitten will shortly disappear to a new home. Cross your paws, Toby. And pray to that Higher Feline that looks after the welfare of cats.
Yours with sympathy,
George.
For sad news about Gerry read http://everycat.blogspot.co.uk/2013/09/gerry-little-cat-made-of-fun-farewell.html
Posted by George Online Cat at 6:52 am 4 comments:

My human pet (I call him Daddy) stole my prey! 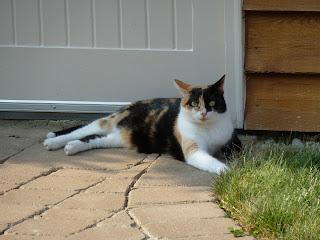 Dear George,
That’s exactly what happened; my human daddy stole my prey!
The other day I took up to some of your readers’ advice and jumped over the fence to discover the world beyond it. That alone made me a “bad, bad girl” – that’s what my humans told me. I had no idea that “jumping over a fence” will make me a bad cat!
Well, I was a bit confused and I thought of a way to make it up to them so I brought them a nice gift – a fat, young baby bird. Were they happy? I don’t think so as they start screaming and he almost kicked my butt (literally) pushing me outside and kept the bird inside. Is that the way humans manifest their joy and appreciation? Now I’m even more confused since I didn’t see the bird since then. What do you think he did with it? Obviously he stole it from me and probably pretended to my mom that he caught the bird for her…. while I was left outside waiting (see photo) like a cold turkey (metaphorically).
Now what? What should I do? Do you think they ate my prey?
Very confused
Zoe

Dear Zoe,
My blood boiled when I read your letter. I wanted to mew "Me too! Me too! They do it to me too!" This is an absolutely disgusting habit of humans. No, they don't eat it. They just take it off us, before we can eat it. And then.... can you believe it? .. they throw it away. A whole delicious meal just goes into the trash can.
I can see from your expression, with your ears back, that you have been horribly upset by this experience. This abuse often happens when you present a bird to your humans. Why? I just don't know. They eat plenty of chicken, which is just another big bird. But when we show resourcefulness and go out and get a bird of our own, they go berserk.
It isn't just the ingratitude of it. It's the sheer waste. Many of us have decided that our humans don't seem to like any birds smaller than chicken or turkey. So we switch to mice. Or even rats.
There's nothing more delicious than a plump mouse but they never eat one! The human response to rodents varies between screaming and jumping on a chair, to scooping up the living rodent and taking it to the nearest park. As for rabbits ... the hysteria is the same.
My advice to you it is to take your bird somewhere in the garden where they can't see what you are doing. Then either eat it yourself or leave it there.
Yours in utter frustration and fury
George. 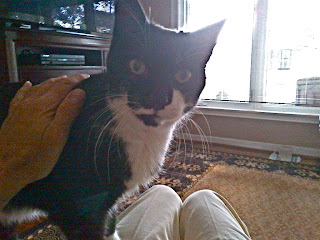 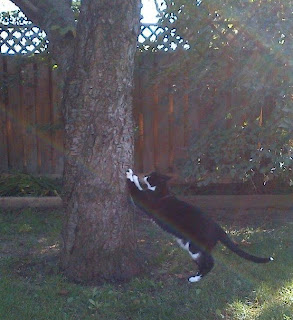 At the respectable age of 17, I should not be pushed into learning new tricks or languages and I hope you’ll agree with me. I think I deserve all the respect on earth as I deserve complete obedience from everyone. The reason I’m telling you this is that I need your help. My problems started after my human pets took off to have fun in Italy and left me with a couple of cat-sitters that don’t speak either Italian or English. I mean….they speak both languages but broken. Now, George you tell me “how can I convey my message to them”? Sign language? Meow
language? I tried it all with no success. They stare at me in amazement and all I’m trying to tell them is “I want to go out on the front lawn. I want to take a nap on my chair on the porch”! Damn it! They just don’t get it!
In a way I pity them since they try to make up for the language barrier with extra food and rubbing, brushing and petting.  Between them, they speak a strange language I never heard. But, the other day I caught them reading my “Cat Ten Commandments” that I hung on my bedroom door. They seemed rather amused and this was very up-setting.
I’m not sure if they’re just pretending to not understand my commands. They spend lots of time with me in the backyard (as you can see in the photos) but I’m confined to scratch the trees in the backyard and not the trees I like on the front lawn.
What do you think? What should I do besides punishing my human pets once they come back?
Yours and very up-set
Graf

Dear Graf,
As you say, you will be punishing your humans when they return. It's routine, really. Just giving them the silent treatment, the looks of lofty disdain, the back turned towards them, the refusal to notice them, and so forth. We all do it. But, as you say, is it enough for this particular situation?
Here you have two humans who cannot communicate. But they do give you extra food, and brushing and petting. If you think of them as silent slaves, rather than sentient servants, you may feel a kind of pity for them. Besides, if you do punish them too much you might not get the extra rations. So I would treat them with the kindness that should be shown by an aristocat to the inferior and dumb humans. Noblesse oblige, Graf.
If your pets are going to come back while the two dumb substitutes are still in the house, you can hurt them further by sucking up to the dumb ones. Ignore the returning humans. Wind round the other humans' legs, lie on their laps, lick them, purr loudly and totally ignore your usual pets. This clear message - that you prefer the new staff to the old servants -- will make subsequent punishment routines all the more hurtful.
It will also keep them on their toes. I have added the cat ten commandments below my signature. In my opinion, they don't go far enough.
Yours
George

1. Acknowledge that I am Cat - no other is above Me. Not even you.
2. Anyone who says I am "just a cat" is not worthy of your time and attention.
3. My affection is mine to dole out, it cannot be forced. Don't try.
4. When people visit, remember I have teeth and will defend myself if necessary. If I flee, do not reveal my choice hiding spots.
5. The fur I shed is my gift to you, so I am with you wherever you go. It is not my fault when you choose garments that do not match my fur color.
6. Did you know my sense of smell is 12 times better than yours? So as much as you hate a smelly litter box, it bothers me 12 times as much! Please help keep it clean, and we'll both be happier.
7. I have a mind of my own. Please do not be upset if I like the packaging better than the expensive toy you just bought me, or the bag your brought it home in. Just be grateful I like something.
8. Pay attention. I am not going to be able to tell you if I am not feeling well, and besides, I don't like showing weakness. I am a cat, the top of the food chain and social order. But if you notice a big change in my behavior, that may mean a trip to the vets is in order.
9. If you leave it on a counter, it's fair game. Ditto that small trash can. If you treasure that pen, or piece of paper or or knicknack - hide it away. After all, I keep my best toys hidden, you should, too. But the spot under the refrigerator is mine, find your own spot.
10. Please have me spayed or neutered. Remember how hard it was being a hormonal teenager? How'd you like to have to live through that several times a year? I don't want to, and believe me, I will let you know!

What's wrong with using the bathtub? It's easy for them to clean up...