Cattack alert... when the postman knocks! 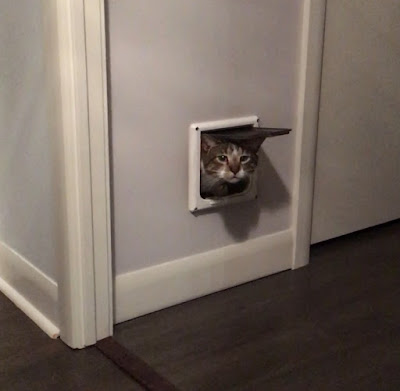 Dear George,
I'm laughing my head off - the story I'm going to tell you. It is too funny.
Recently my human provided me with a cat flap(which was much overdue, by the way.) Coincidentally, we got a new postman too! And, that's how it all started.
I was sunbathing on my porch when I saw the new postman coming with the mail.
He looked around and saw the cat flap, looked around again and then he bent forward and slipped the mail inside through the cat flap…then he rang twice. Wow! He definitely wasn’t Jack Nicholson nor did Jessica Lange come to open the door!  Why he rang the bell twice I have no idea. Anyway, he did exactly same thing for the next few days. Since it seemed to me that he either hasn’t noticed our mail box or has chosen to ignore it I decided to play a little game with him! Next day I stayed indoor waiting for him. The minute he slipped the mail in I bit his hand! He startled so easily that he forgot to ring the bell. The following day I was again on the porch waiting for him. I saw him coming down the street (he didn’t see me) – this time he was carrying a stick in his hand! I was so curious to see what he’ll do with that stick! OMG! You won’t believe it! He used the stick to open the cat flap and slipped in the mail! Aha, okay! So next day I “clawed” his stick J I don’t know what he thinks but since that day he leaves the mail in front of the door and does not ring the doorbell anymore! George, I know I misbehaved and I’m still laughing about it but how could he not realize that…that was a cat flap? What should I do now? Tell mummy of my misbehaving or should I sit on top of the mail box meowing so I’ll bring it to his attention? Maybe he is a good man who has never seen a mailbox in his life?
Puzzled but laughing
Gizmo