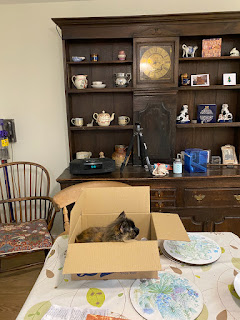 An essential for a happy feline life is choice... something which humans so often deny us.

Each morning I ask myself - shall I use the catflap or would I prefer my human to open the garden door for me?

Shall I use the human bed upstairs or shall I use the sofa? Or perhaps the cardboard box on the kitchen table? Or even the box that my human put for me on the top of the cupboard, after I used to spend time there without a bed? 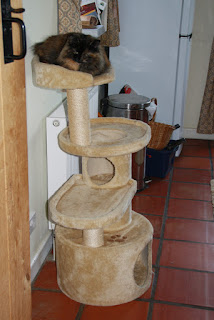 Do I want a bed? Or shall I just lie flat out with my legs apart in a patch of sunlight in the living room? Or sit on my special cat lounge looking out into the garden.

Choice, you see. Make your human give you multiple beds and multiple resting places.

You know it makes feline sense. 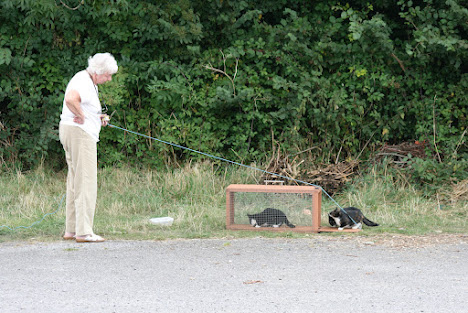 Feral cats and cats that have lost their home live miserably short lives. Kittens often die before the first winter, females are exhausted and half starved by constant kitten bearing, and males roam around looking for sex, risking their lives on the roads and picking up fatal infections.

How different from our own lives as pampered pets. Regular meals, Warm beds. Central heating. And human servants.

As cats we can't do anything much, as it is against our nature to share or give away our food (unless we have had our own kittens). Most of us do not want to share our homes with another cat. We prefer our humans to be totally devoted to us.

So it's up to humans to help. Out there are dedicated cat trappers who will help feral kittens find new homes, trap and rehome stray pets, and trap, neuter and return ferals.

My personal favourite is Sunshine Cat Rescue, a small devoted rescue in the UK. If your human knows a good one, purr in their ear till they send some money.

Posted by George Online Cat at 5:17 pm No comments:

How I got my tabby markings

Spots, stripes or blotches, we tabbies have beautiful coat markings. I am a silver tabby but tabby markings can be found in beige or brown coated cats and a few gingers too. It's the background colour that varies.

Now some human geneticists have been studying just how it happens... in order to find out how the leopard got its spots. (Did you spot the Kipling reference there?)

First they found a gene they called Taqpep. Depending on how this gene worked, a tabby was striped or blotched and (guess what) cheetahs were just large tabbies when it came to coat colourings.

Then they investigated further and found that tabby markings happen very early before birth. The skin surrounding the feline fetus starts growing thicker or thinner. This is even before there are any melanocytes, the cells which are responsible for different colours.

This coincides with the tabby patterning. The eumelanin defines the background colour to the stripes, blotches or spots. 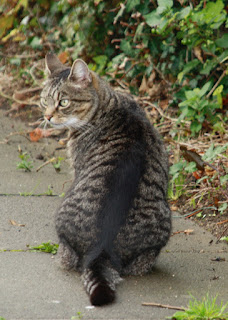 They then looked back even further into the earliest days of the embryo and found  the patterning could be recognised at an even earlier stage. The Taqpep gene influenced the pattern of how a protein coding gene Dkk4 was expressed.

With me? Difficult if you are not a geneticist.

Their conclusion was that it was a reaction-diffusion model, a sort of genetic game whereby a colouring gene was inhibited or  expressed.

And all this led back to a very clever human Alan Turing who in the l950s suggested this particular kind of gene expression.

As for me, I don't understand all of this but what I do know is that tabbies are the most beautiful of all cats, whether they are pussycats like me or big fierce cats like tigers.

Posted by George Online Cat at 11:28 am No comments: 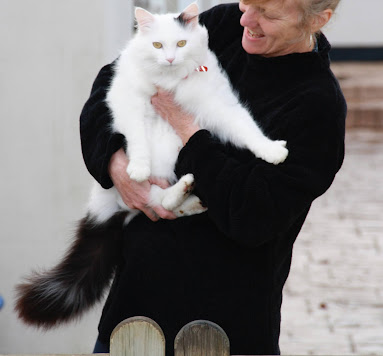 Covid has made normal people into indoor-only humans. Which means they have been emotionally needy. They have sought our attention and constantly demanded cuddles.

Now the dilemma facing cats, whose humans do not go out of the front door (that large cat flap often opening out into a street), is being recognised. Stress. That is what we cats are feeling, as humans become dependent upon us.

The feline welfare manager of Battersea cat and dog home says ‘Having the constant companionship of their owners during the pandemic may have left some cats feeling as though they have lost part of their territory or have less control over when and for how long they receive a fuss.’

Until this pandemic most humans led indoor and outdoor lives - leaving the house at regular intervals five days a week and leaving us to get on with our own lives. For some of this it meant a noonday snooze on the bed. For others, it meant visiting the old age pensioner down the road who would offer a second breakfast.

Lockdown has meant humans stayed at home. Almost all the time. They call it  "working from home." Though heaven knows what they do with their so called laptops (a cat on the lap is one thing: a digital device is quite another).

Many of us have felt positively harassed. We have been petted too much. Picked up too often. Cuddled when we don't want it. Our routines have been interfered with. Our serenity has been severely upset by constant demands for affection.

Purrlease stop. Go back to the office leave us alone.