Indoor life is boring... I want to get out and about. 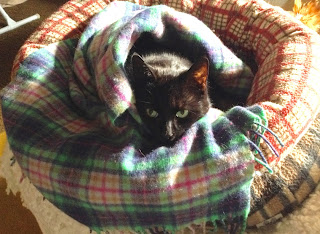 My brother Marti is a bully and it seems that my human either doesn’t realize it or doesn’t know how to deal with it. If you remember we are the three cats (Marti, Bentley and Princess Penelope) rescued from the same shelter. Marti has this crazy idea that he is somehow special and can bully the rest of us. I personally think he’s having an identity crisis. I think he’s having some self-confidence issues and that’s why he behaves like some “diva”. But, he can get away with pretty much everything!

He managed to stress Penelope to the extend that she won’t use the litter box properly.

He’s constantly stressing me by “pushing” me off the sofa or eating my food.

I’m very calm by nature and don’t like to put up a fight unless absolutely necessary.

I don’t like the idea that Princess P or myself will be taken back to the shelter because “we don’t behave”! I’d like to learn some ways to put Marti in his place. I’d like to be able to communicate to my human my concerns. And, George, between you and me, if it’s someone special in this house….then, it is me (as you can see in the photo) So George, I really hope that you and other cats on this blog can share some wisdom.

Being bullied is really awful. We cats deal with it by careful avoidance. Can you find yourself a place where you can retreat from him? Something like a sitting place high up? Or hidey hole where you can sit and guard the entrance - so that he can't get in. A covered cardboard box with an entrance hole cut into it makes a good retreat. You can sit inside with your head inside but looking out and he can't get at you.

Humans are dumb about cats because they are a promiscuously social species - they think we make friends and like company. They can't see that living with a bully is extremely stressful. Usually they only discover this when we get stress-induced cystitis, spray in the house, or have fights. They don't notice our unhappiness.

When we don't get on, we cannot share resources. So there has to be at least one litter tray for each cat and the trays should be in different locations. Poor Penelope must be able to get to the litter tray safely when she wants to. Sometimes bully cats sit outside litter trays and ambush us when we have to go in.

There should also be more than one food location - at least two in a three-cat house, preferably three. We cats hate having to eat close to each other. It's just not natural for us yet humans make us do it. Water bowls should be in several locations too. And there should be lots of cat beds and hidey holes.

Some people just separate the cats - with one cat living upstairs, one living downstairs. Installing a Petporte or Sureflap microchip operated cat flaps within the house can allow each individual cat to retreat to a room on its own. Or humans can operate a time share wherebye one cat spends 6-8pm in the living room, while the other spents 8-10pm.

Frankly, Bentley, if Marti continues to bully, your humans should think about rehoming him. Some cats cannot live in groups and it is best to find them homes where they can be on their own. If something isn't done, your health will suffer.

William reports: "I am feeling better."

I am feeling a bit better. George is still behaving like an adolescent lout, chasing me at all opportunities, lying in wait for me and trying to ambush me on the litter tray. Celia managed to stop him doing the latter this morning. She caught him in mid leap. She's taking a great interest in my deposits. I turn, look, sniff and cover it. She undoes the top, looks at it, sniffs, sizes it up, and takes it away instead of covering it up, as a good cat would. Then she crumbles the clump to see if there is blood in it. There isn't. She was frightfully pleased because I did just one big pee that night instead of lots of little ones.
I had a peaceful night. George is now locked up with his own litter tray, food and water in the spare bedroom. He seems OK about this but it doesn't stop him wanting to chase me. It just means I have the hours of darkness free from worrying. Mostly I wait till half way through the night and join Celia and Ronnie on the bed. Three in a bed, like three in a marriage, is one too many so sometimes Celia leaves to join George. It's not unlike an Edwardian house party at times in this house. Tobermory would have had some thoughts on this.
The living room smells sort of reassuring. There's a plug in (Feliway since you ask) which is beginning to smell nice. George was awful last night - wouldn't leave me alone. But nonetheless his behaviour is just a tiny bit less worrying for some reason. Oh yes and Celia has put my out door basket, where I used to sit to keep away from fierce elderly Mog (more of that another time) on a little raised dais. The idea is to stop George looming over me while I am in the basket. I have spent a lot of time this morning in the basket, feeling a little safer now it is higher up. I also ate some delicous expensive cat food made into a kind of soup - to increase my water intake, says Celia. She chased away George who wanted some. He doesn't need it, she said, but she let him lick the bowl clean. I am to have this day and night.
Perhaps my interest in my health is getting into a sort of hobby now that I am getting older. If you asked me how I am today, I might tell you in detail. I take a pink pill (to fight off urinary infection) morning and evenings. It doesn't taste too bad. This is medication for my waterworks trouble. The tests showed an infection - though it might have been bacteria from the litter tray rather than a secondary infection from cystitis. She is crumbling it with a Vetsyme tablet and I am eating it without needing it forced down my throat. We senior cats can't be too careful.
I'm still worried in general, but I am less worried. Lets hope it stays that way.
Posted by George Online Cat at 1:24 pm 2 comments:

A cry for help from William - George is bullying me 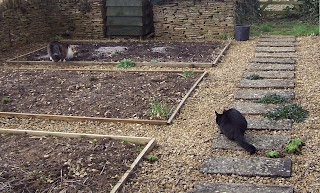 Help. This is me, William the Tabby and White, George's house mate (not friend). This is a strong protest and a cry for help. George is bullying me. He waits around until I start moving and then pounces on me. He shoots across the garden at high speed knocking me over when I am having a quiet dig. Normally I lie down quickly with all four paws and claws at the ready to stop him, but lately I have been losing my nerve. I just can't bear it. I run. This is making him worse. And I have developed a worrying problem with my waterworks. I need to go more often and it hurts when I do so.
Celia, after years of study of cat behaviour, hasn't done too well at solving this problem. She has tried yelling at George which has no effect at all though it does warn me that he is coming. She has tried diverting him in full pounce but she's too slow. She did wonder if giving him attention was making him worse but she has heard my protests when she is not in sight and has decided this is George the bully, not George the attention seeker.
I could have told her that of course.
She took both of us to the vet, because at first she wasn't sure which of us was doing the little bits of urine in the litter tray. Both of us got a clean bill of health. Then she locked up George all night and as the little bits of pee were deposited, she concluded (rightly) that I was the sufferer. She gave me wetter food which made me a little better, but then it started again. So off to the vet again. I was so upset I started purring loudly in the waiting room - a cry for help or (as the behaviour people put it) a "care eliciting call." Of course I was known as Mr Purr to Tina who worked at the Elizabeth St Veterinary Hospital. This is the first time I have purred at Cogges Veterinary practice. (Normally I bite, particularly if anybody puts a thermometer near me. Last time the vet nurse had to do pin-down on me when they wanted to do the unspeakable and stick it up my bottom.)
This time the purr led to better treatment. No visible problems, said the vet. But he sent Celia home with some granules, and a pipette. She left me in the main room with the litter tray with the granules, came back last night, used the pipette to get the urine, and this morning took it in its bottle to the vet. Am I suffering from stones? Or is it the unbearable stress of living with George, who ought to have an ASBO.... watch this space.
Posted by George Online Cat at 1:40 pm No comments: