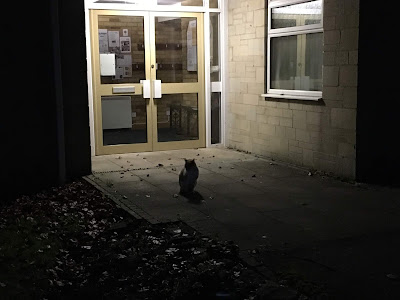 It's cold and miserable and damp in Britain. And what do some old fashioned humans do? They lock us out of the house, away from warm beds and central heating.
No wonder that some of us leave home or just follow some friendly stranger in the hope that they will let us into their house.This time of year it is too wet and cold for a cat to be left outside.
Besides, night time is the most dangerous time for cats. We get dazzled by car lights and then run over by cars. We get attacked by foxes or stray dogs or (in the US) coyotes.
So don't do it, humans.

Still time to order you copy of my book here.

Lauging at my humans' inability to become Master Mousers. 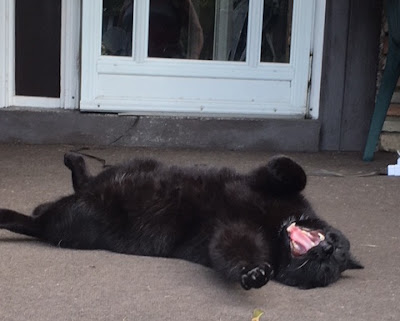 Looking at my photo (attached) you might think I’m yawning or screaming but I really don’t! What I’m doing thou is laughing out loud… at my human pets! You see, I live in a posh neighbourhood where everybody is minding their own business ….neighbours don’t share too much of a social life! I think my humans are the only ones enjoying the outdoors and once in a while a BBQ! It looks to me that my humans are the only ones eating meat on our street! I don’t know if the others are barbequing carrots but


I decided to teach my humans how to hunt for a fresh, juicy steak, sorry…mouse!


I must admit I totally failed! When I first came home with a fresh, still alive mouse my mummy screamed so hard that she scared the heck out of me and the mouse! So, I gave up on her. Next I tried my human daddy but I wasn’t any more successful than first time!


When I brought him a little bird to taste he was in such a shock that I really gasped in disbelief and the bird flew away! Phew! Damn it! I said to myself I’m not going to give up on him so easily! Next I brought him a baby rabbit! Do you think he was pleased or grateful? No! He yelled at me! Well, this was too much! Having enough of it I let the rabbit go!  George, why are humans so difficult to train? I’d like to know what I did wrong that I failed so miserably. In the meantime I’m rolling on my back laughing out loud as I let my humans believe that all meat comes from the frozen section at the superstore!

Dear Bear,
Humans are so ungrateful. I have over the course of several years presented my human with mice, shrews, rats (dead and alive), a dead weasel (really hard to catch), and several baby rabbits, some of them still alive. Like you, I have suffered from screams, yells and hysteria (over the live rat). It is extremely hurtful.
The live rat was my final effort to teach them to hunt. I left it in the kitchen for Celia to finish off. I thought that its athletic abilities -- it ran up the corner of the wall - would arouse her hunting instinct. Nothing of the kind.  So I had to grab it myself and she shooed me out and shut the cat flap.
The smallest kitten learns to hunt. How can these humans be so foolish. I have repeatedly tried to educate Celia - she just cannot learn.
Yours
George.