Roof top climbing - it's the life 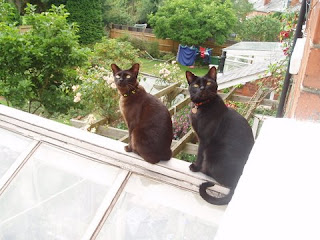 We are two Burmese cats, Inky and Ellie. We thought we’d let you know that we have invented a new way into our humans’ bedroom. We could simply go through the door but this is a much more interesting route.

We start from the garden and jump up to a ground floor window sill. We leap from there to another sill at a higher level. Then we spring onto the sloping roof of a lean-to. Walking up that roof we can jump on to the pergola. The next stage is to prance gingerly for 5 yards along one of its transverse beams. At the far end of the pergola there's a hop up to the edge of the conservatory's sloping roof. We climb up that carefully. After progressing along the ridge we jump to the bedroom window sill.

Then all we need to do is to mew loudly until one of the humans finally finds out where the noise is coming from and opens the window to let us in.

What next? Well we jump into the bedroom, down the stairs and then out into the garden to start the whole exciting procedure all over again! What do you think of that? 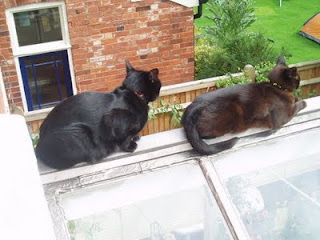 I really admire your leopard-like mountaineering. Marvellous photos of you on the top of the roof looking down on the pedestrian world of human beings.

This is the outward visible sign of our species' inward superiority over humans. Don't see many humans high up on roofs - except those poor souls that have to put up a ladder to get there. If only we had cat olympics we could show the world what we can really do.

Climbing allows us to practise a particularly good game. We climb up trees and then stay on a high branch mewing with apparent distress. The poor old humans come up, stand under the tree, and make distress noises themselves. Out come a ladder and up climbs a shaky human.

Then, just before he/she reaches up to grab us, we jump down with ease.... game, set and match to us felines.

Simple. So simple. They always fall for it.

P.S. Due to shocking absence of my secretary Celia, my comments were a day late... I am thinking of firing her. It's just not good enough.

Why is Richard so mean to me? 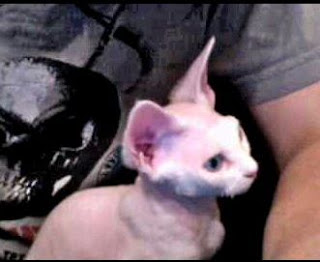 Dear George,
I’m lost in confusion and I need your help. I’m a pure breed or so I was told, apparently expensive too. I got to my new home (a while back) where I was welcomed by “hisses” from no other then Richard, self-named the Lionheart. At the beginning we lived in separate rooms but now we share the house; he is my brother (not my choice). We play a lot but he always wants to rule – he thinks he is the king! I think he is such a mardy! I’m a young, cute kitten and I think he should be nicer to me. When my human mommy is not around I’ve been called ET (whatever this means) or “ugly”. Richard is making fun of me by saying that I’m a “pure breed experiment gone wrong”
He says that he’s “the wild and handsome one”! This is cruel.
What should I do? Should I tell mommy?
Confused
Luna 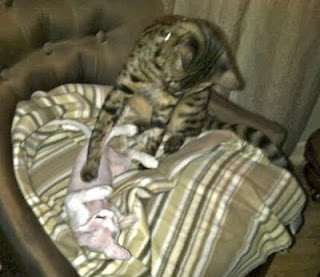 Dear Luna,
I blame your humans.... they probably thought Richard would like the company. Humans are disgustingly and undiscriminatingly social. They eat together and hang out together all the time. It's quite horrifying to see them in a sort of pack. Irresponsible socialising is their thing. And they think we cats are like them.
Well, we are not. We don't hang out in packs. We might hang out with another cat if we had met in kittenhood but, even if you think Richard is your brother, it is unlikely. Where is your hair? Besides, if we cats are allowed to mate with whom we choose, a litter of kittens can have several fathers. (Humans reading this should remember the survey which suggested one in five children was not fathered by the man who thought they were his! So no sneers about promiscuity, please).
Sometimes we do learn to be friends with other cats: sometimes we just remain aquaintances. Richard was quite rightly upset when a small intruder, you, turned up in his territory. Luckily your humans are not as dumb as most of their species and they introduced you the right way. Richard will eventually calm down (as long as the humans don't punish him) and you will work out a relationship which allows you both to live in the same house. Have patience. Be confident in the feline ability to adapt to most things.
Rolling on your back is a very good idea. It will show Richard that you are not going to pounce on him. And, if things got really bad, you have all four paws with claws to fight him off.
Love
George

Wicky Wuudler, the wit and wisdom of a great cat. 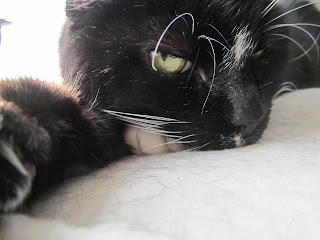