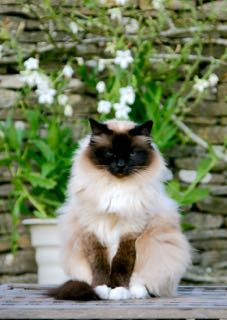 Dear George,
I have a problem with my litter tray. It is too small. Look at it. I am not a large cat but she has given me a tray that is only just my size. In order to dig I have to leave my bottom outside it, dig the hole, then turn round and place my bottom over the hole. It's difficult.
Worse still she doesn't keep it clean enough. I am digging through my own waste. She only clears it out once a day and sometimes once two days. I hate getting my paws soiled. And yet that is what I have to do each time I want to use it.
I have a cat flap but I never use it because I am frightened of the big cat next door who bullies me. I dare not use the flowerbeds in case he attacks me while I am toileting....
What to do?
Yours
Betty the Birman.


Dear Betty,
You have only one choice. You will have to start going outside the tray. Yes, I know you don't want to. But what else can you do to get the message across?
Small litter trays and slovenly humans are a bug bear of mine. They wouldn't want to have to pick their way through human waste products in order to relieve themselves. Particularly if, like us, they had bare feet. Why make us do it?
I made my views very clear to Celia who has given a short talk on the topic to her fellow humans. Get yours to look at it here.
Yours
George
Posted by George Online Cat at 10:01 am 4 comments: Links to this post