Humans have put out moonlight 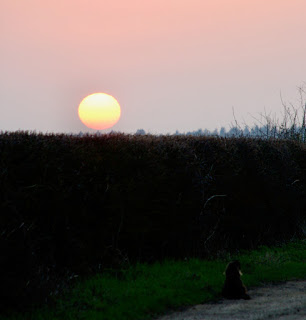 The excitement of moonlight nights... the hoot of the owl, the footfall of a passing fox, and the ear twitch of grazing rabbits keeping out of its way. Humans miss all of this. They are blinded to the beauty and the thrill of it.
The songs and poems may talk about moonlight: but they don't practise what they preach.
Their eyes don't work properly in the dark so they fear it. Instead they light up their houses at nightfall and light up the streets, themselves, with street lamps.
The beauty of the moon disappears under a tide of artificial glare.
The time that means most to wild animals, and to us cats, is the twilight and the dawn. They cower in their houses at those times, watching TV and ignoring Nature herself.
They have put out the light of the moon.

How to deal with noise in the living room 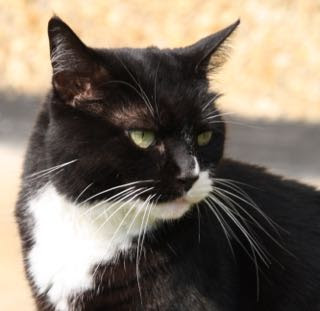 I am interested to know why humans listen to some awful noises on a machine in the lounge (which is supposed to be a comfortable and serene area to relax). The odd time it sounds okay but sometimes I find it very upsetting and it causes me to react to show my displeasure. A cat I know demonstrated his displeasure by spraying one of the boxes the noises come out of! I think this got his message across very well! It is harder for me to do this as I am a girl. Are there any other effective ways you can suggest to demonstrate my displeasure? I am willing to carry out any instructions you provide to keep the lounge as it should be; a second bedroom for my slumber! If I let my humans get away with this what else will they try to get away with? It could be the beginning of a long slippery slide and I want to nip it in the bud! I look forward to your advice!
Yours
Gracie

Girls can spray and do spray too. Particularly feisty females who want to send a strong message to their humans. Even nose-blind humans get the scent message when we spray. And there's something enticing about spraying on electrical items or even on electrical plugs.
They don't just give off a noise: they give off an interesting plastic warm-up smell, of which humans are totally unaware.

That said, spraying is the ultimate weapon. It's almost the equivalent of the nuclear option for humans. It doesn't hurt humans but it upsets them dreadfully and can ruin the cat-human relationship.
So just Turn off, tune out and drop into sleep.
Remember we cats can sleep anywhere - here are some photos to remind you.
Yours George
PS. I adopted this motto from the l960s hippy one -Turn on, tune in and drop out. Hippies knew how to relax even if their drug problems were awful.
Posted by George Online Cat at 9:15 am 5 comments: 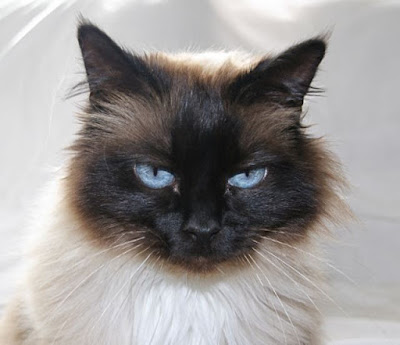 Dear George,
I have discovered a human book about feline wisdom. I think it has to be written by you, but the name on the cover is Celia Haddon.
What is going on? Has she stolen your ideas? Humans are so unscrupulous.
Yours
Coco

Yes, my life's work, my book, has been stolen by my secretary. I needed her help as my paws are just not capable of manipulating the keyboard. She transcribed my ideas.
Next thing I know she tells me that it has been published this month. She has passed off my wisdom as if it were her own.
I felt a strange mix of fury and delight. Fury at what she had done. Delight that at last the wisdom of cats is being recognised.
I am planning revenge. I might pee on the TV.
Yours
George
Posted by George Online Cat at 5:40 pm 7 comments:

Seductive charm is the way to a forever home. 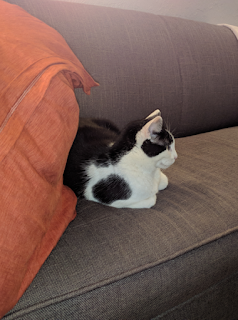 Dear George,
I’m trying to find a forever home and I need your advice.
I won’t bother you with the details of my life but, you need to know that I’m in a foster home right now. This would be my second foster home and I would very much like this one to become my permanent home. I like my foster human too – he’s quiet! At times he seems to be grumpy but I know he’s not! He is kind and generous! I believe he had cats before because I can still smell them. He doesn’t think I’m a good fit in his life right now but I know he likes me! He travels summertime and he worries as he doesn’t know what to do with me! George, how can I tell him that I’m OK to go for a month or two in a cattery or one of his friends’ house if I’ll be with him for the remaining 10 -11 months of the year? I really like him! I’m happy here!
With thanks,
Petrushka

Dear Petrushka,
Foster homes can become forever homes, if a cat plays her cards right! But be careful what you wish for. If he really is away from home for several weeks, you might not enjoy being in a cattery for that length of time. Of course, if there is a partner or a best friend who could help out by boarding you, that would be great. Many cats have two homes - an official one and the one down the street where the people give him a second breakfast.
To turn a temporary home into a permanent one requires you to exercise all your charms. Purr at him frequently. Roll on your back and when he tickles your tummy, do not scratch (always tempting, I admit). Practice little loving looks with your head on one side. Jump on his lap and knead - gently.
Greet him with your tail up when he comes home from work. Watch TV with him. Play with his newspaper. Sleep on the bed with him purring regularly and quietly to help him go off to sleep. You know the score. Seduce him with charm. Make him love you. It's what we do when we want something.
Yours
George.

Posted by George Online Cat at 8:53 am 6 comments: 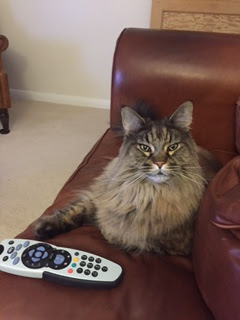 Dear George.
I have discovered a new toy, the TV zapper. There are two games I play with it. The first, and easiest one, is just to push it off whatever surface it lies on. Here on the sofa, I give it a good shove on to the carpet, then push it under the sofa.
The fun is seeing my human on her hands and knees trying to poke it out from underneath.
The second game needs all my Maine coon strength. I press it with my front paw. It has to be a firm press so usually I stand on it, rather than just poke.
The result is very satisfactory. The moving picture on the TV changes. The humans get very aroused and angry about this. It's amazing how that square TV can wind them up.....
I recommend these two games to all cats, though small ones will only be able to do the shove-push-and-hide game.
Yours intelligently
Bob.

Dear Bob,
It is always good to hear of a new game, especially one that arouses humans from their lethargic gaze at the TV. Their visual addiction is one of the most irritating habits, though it may allow a quick whisk round the kitchen and a quiet crunch of anything edible on the high surfaces there.
My own way of interrupting TV addiction is to leap onto the top of the TV (if it is an old fashioned one) and drape my tail over the picture. If that is not possible, and nowadays modern TVs are designed to stop this, I go as near as I can to it, sit below and make meow noises at the screen.
That usually gets their attention.
Yours
George.
Posted by George Online Cat at 8:58 am 6 comments:

I want to have a career in Feline TV