Purrfect nursing for your sick human

I have been busy these last six days nursing my sick human. She has been suffering from some kind of stomach bug that has left her feeling nauseated and weak.

So she sleeps a lot. Luckily I sleep a lot too. So in the past week I have worked really hard to help her. I have upped my sleeping time from about 80% of the day to 90%, only waking her up at meal times.

I aim to sleep elongated near her, my back to her, but near enough so she can rest her hand on it and feel the rhythm of my purr. She can also hear the regularity of purring. it seems to relax her.

Between meals, I have purred a lot. Purr therapy seems to work well on humans. When she goes to bed feeling sick, purring seems to help her fall into a healing sleep.

Fortunately she has been conscientious in her duties - cleaning the litter tray and making sure I have a bout 4 meals a day and renewing the dry food which is there for a snack.

It's been hard nursing her but I am doing well. She ate a cheese sandwich a few hours ago and gave me a bit of cheese as a thank-you present. 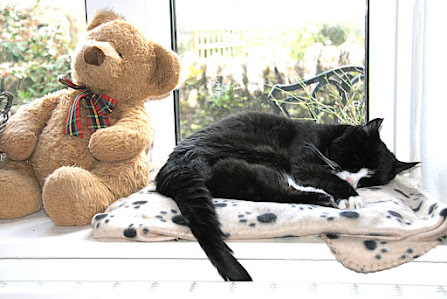 We elderly cats do sleep more than younger ones but it's just old age, as some ignorant humans think. We may be in pain.
One estimate is that a third of all us cats suffer from arthritis.

We don’t show pain like dogs do. We don't complain. We don't whine or wimper. Most of us don't even limp. We don't show that we are hurt, like humans do. We just suffer in silence and do more sleeping. If humans were more observant they would notice that we hesitate before jumping up, and we may have difficulties on the stairs. Some of us need to use a chair to get to our favourite high places. We don't play games like we used to.

Humans get painkillers from a doctor, but only 7% of arthritic cats get any treatment at all. Yet there are special diets and painkillers that would give us a proper quality of life.

Are you listening, humans?

The meaning of rolling 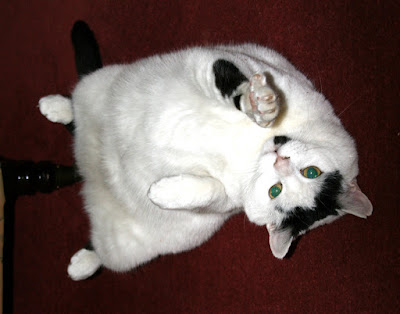 Rolling is what we do when we are happy and relaxed. So humans think. And that's where they are wrong. Rolling has different meanings.

This kind of roll, done by my friend Boomer, is just a happy relaxed roll in front of his human. It means something like "Look at me! I'm your friend."  It does not mean "Tickle my tummy."

If an ignorant human thinks its safe to tickle Boomer's tummy, he will soon be put right. Because rolling then raking with his painful claws is also what Boomer does to toy mice - as a kind of play-with-prey game. Human beware!

Rolling, or rather lying on the side of the body, is also something cats do in a play fight - or in a real fight.  So itl's not straight-forward.

A roll might also be a roll in the dust to thicken the coat or change our smell. It might be a sort of floppy roll to expose our tummy to the sun.

Humans need to attend very carefully to what we do, how we do it, whether we look relaxed, playful or even fearful. They need to consider the context not just one single action.

So a roll is either relaxation with attention-seeking, a play-with-prey (human fingers too) move, a move in a play fight, a defensive move in a real fight, or just a chance to roll in the dust or in the sunlight.

Posted by George Online Cat at 9:27 am 3 comments:

Are humans learning to talk? 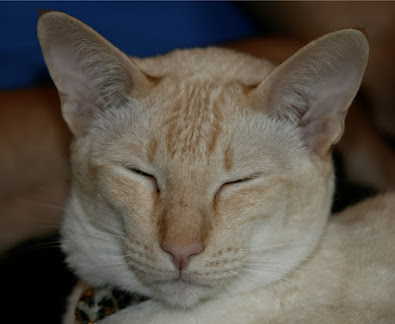 Humans depend upon us cats for affection and we depend upon them for food and warmth. How can we encourage and reward their efforts to win our love?

The photo shows one very easy reward for a human - the slow blink.

First do a few little half blinks to catch your human's attention, then do a long slow blink. This will be recognised as a sign of affection by any savvy human.

Indeed some humans are beginning to do a slow blink, themselves. A few of these noisy chattering human pets are learning to "talk cat." They call them selves "feline researchers."

They started to slow blink cats and see what happened. Naturally the cats concerned were thrilled by finding humans who were trying to talk our language. So they walked towards them to find out more.

The humans concluded that the slow blink might be a "positive emotional communication between cats and humans."

We concluded that these dumb (though noisy) humans were at last beginning the first slow steps towards learning to talk. When will they learn to purr?

Posted by George Online Cat at 9:56 am No comments: