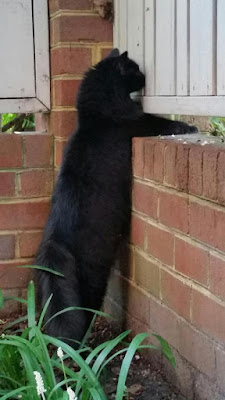 Dear George,
Cat scanning is what I’m doing as you can see in the photo attached! I’m X-Raying the neighborhood in search of a hot spot in someone’s garden or a chance for an extra- meal or treats or even a secondary home I can rely on …in case I need to rehome myself!
But, as good as I am at cat scanning I don’t know how to determine what neighbor is “cat friendly”! Of course, I avoid the ones who have dogs living with them or multiple cat-houses! No, thank you as I aim to always be the Alpha Cat!
So, George I would really appreciate few tips on how to recognize the cat friendly neighbors!
Yours truly,
Lila
Dear Lila,
It's not easy to recognise cat friendly humans, because they don't have tails. We put our tails up, sometimes with an extra kink, when we want to show to a human, or another cat, that we are friendly. They can see this signal as we walk towards them. Without a tail, this isn't possible. (Not sure how Manx cats cope!).
It is always good to have a Plan B for Rehoming. Reasons to leave home include a new cat, a new dog, a new human boyfriend, and a human kitten. (Human babies are not only hairless but they are very noisey and smell odd. Weirdest of all, their human parents dote on them!). Any new living being in the house (except goldfish or little birds) can be very upsetting.
Which is another reason for cat scanning. We need to make sure that every inch of our core territory and hunting range is safe and welcoming. Have you thought about getting up on the roof? Also check out the roof of the car, the garden shed, or next door's garage.
Yours
George.
PS. This blog may not appear next week as my secretary is on holiday and my paws cannot manage the keyboard.
Posted by George Online Cat at 4:38 pm 4 comments:

Rabbit and cat - is the rabbit safe? 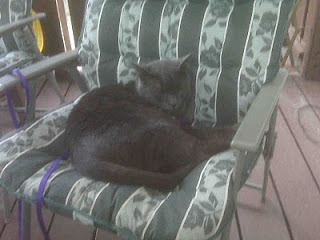 Dear George,
My name is Tutu and I am a lop-eared human - no, sorry, a lop-eared house bunny! My stable mate is Frederico the Cat. You may have met him already. I am 10 years old and he is a young whipper-snapper.
My humans seem to be very fond of him but he is a little b.....! I wish I could train him but he won't listen to me or obey anybody. Look at him in the photo. He thinks he's some great movie director!
What can I do? Can I trade him in? What do you think?
Hugs
Tutu 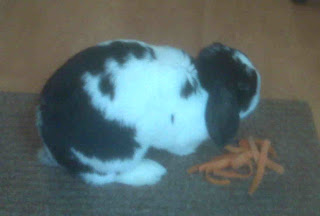 You have a bit of a problem.... Or you might have. Kittens brought up with house rabbits probably think of them as family and are probably going to be safe with them. Probably. That's the rub.
My attitude to rabbits, the natural cattitude, is to stalk, pounce, grab and eat them. In that order. It is literally hard wired into my brain. There's a neuroscientist, Jaak Panksepp, who has revealed that when you stimulate the seek-and-reward area of the brain, rats sniff and forage around, cats stalk and pounce. It's just the most enjoyable thing in life for felines. It is what a cat does.
So, your human shouldn't leave you alone with Frederico - just in case. (Any more than a large dog should be left alone with a baby or a toddler). Yes, it is probably safe almost all the time. But again it's that probably and almost. If you suddenly scuttled away extra fast, seeing you running might set off Frederico's chase instinct.
I don't think you should trade him in. As long as your human is sensible and doesn't let you play unsupervised, you will be safe. She should make sure that you are always in your crate or den when she is out of the house. Of course, if you were a giant rabbit, you could probaby chase and harass Frederico. But a French lop, which I think you are, just isn't big enough to turn the tables.
Cats and house rabbits can live together but only if the humans never forget that the cat is the predator and the rabbit is its prey.
Love (and I would love you in a gastronomic kind of way)
George
Posted by George Online Cat at 7:51 am 11 comments:

Did God who made the robin, make me?

Did God who made the robin (which I caught yesterday) make me? Robins die easy, but mice are much more fun because they die slowly. When they sit frozen with fear and completely immobile, I just stare at them. If their immobility goes on too long, I poke them to make them move.Then when they make a run for it, I leap on them all over again - eyeing, stalking and pouncing over and over again. I do this in play for half an hour or so until they die in earnest. Even when they are dead, I often play with them. I throw the corpse up in the air to get it moving. Did God make me in order that I should torture mice?
I can't help it. My instinct is to pounce on small furry objects which are moving or to leap up at feathered ones that are flying past. If God made me, he made me to be a smaller version of the fearful symmetry of the tiger, a small but deadly killing machine. I have to hunt. It is not just what I do.The sequence of hunting, - eye, stalk, pounce, grab and eat - is intelligently designed into my flesh and blood. This pattern is what I am. I know what is play for me is torture for the mouse. Am I therefore evil?
But I am not just a hunter. I think about spiritual topics. Is God a cat? Am I created in the image of God. Even if God isn't a cat, and is more like a human, what have humans to be proud of? They have slaughtered more of their own species than I have had mice or robins. They kill each other. I don't kill cats. The very idea is shocking. If humans are made in the image of God, then it must be a pretty beastly God (except beasts do not usually kill each other). A cat God might be preferable.
This all leads up to a bit of a boast. I am in a Times blog, written by Ruth Gledhill, the religious correpondent. http://timescolumns.typepad.com/gledhill/2007/05/faith_in_all_th.html#more
Posted by George Online Cat at 1:24 pm 1 comment: