Halloween and Fireworks day - be careful out there 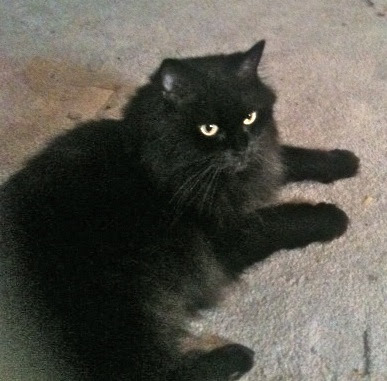 I don’t know if Halloween is as popular in UK as it is in North America but I worry for all of us, black cats! We (me and my siblings) are not allowed outside on such day or night but even the kids knocking in the doors can be disturbing. They make so much noise and what for? A candy or a chocolate bar?

Plus, some of them are wearing frightening, ugly costumes and masks. Who could think of this as fun? Some people are even dressing their dogs in ridiculous costumes. Who wants to be a “bat” or “pumpkin” and then taken for a walk? Not us cats, I bet!

I don’t understand what Halloween is all about but, I don’t like it as I don’t like fireworks in the summertime. I think of it as poor taste entertainment! George, what can we do? How can we escape this “sugar rush”?

We have Halloween too and then later on November 5 we have Guy Fawkes day or Fireworks Day. There are bonfires and fireworks. The noise is terrible. In the past boys used to make up guys out of mops and old clothes and collect "a penny for the guy." Now they do trick and treat instead or as well.

But there are also a few feral humans who make the fireworks a chance to torture animals. Occasionally cats get deliberately thrown into bonfires. Or these feral youngsters tie fireworks to dogs' tails. It's not safe out there on the street for the next fortnight. Wildlife suffers too, as hedgehogs sometimes take refuge in the heaped up stuff ready for a bonfire - and then are burned to death.

My advice to all cats is to stay indoors as soon as it gets dark. Go under the bed if you are still scared - sensitive humans will not try to rout you out. They will leave you there where you feel safest. Even in the day time stay away from strange humans just in case they are a feral gang.

There's a special danger for black cats like you and me, Bentley. It is twofold. There is a rumour that black cats are caught and tortured or burned alive by black magic practitioners on Halloween. This probably isn't true. But then what happens is that black cats are scooped off the street by well-wishing humans and handed into animal shelters.

So far so good, you might think. Except that in the US (less so in the UK) "unlucky" black cats are slow to be adopted. So these handed in cats are then quietly euthanised by shelters who feel they can't find them homes. (in the l990s, animals shelters killed up to 70% of the cats handed in).

Please, any humans reading this, don't rescue black cats off the street unless you know a no-kill shelter to take them too. You may be "rescuing" them only to kill them. They are better off taking their chances on the street.....

Be careful out there, all you fellow cats.

Posted by George Online Cat at 7:22 am 6 comments:

Pain - how do you tell if your human is in pain? 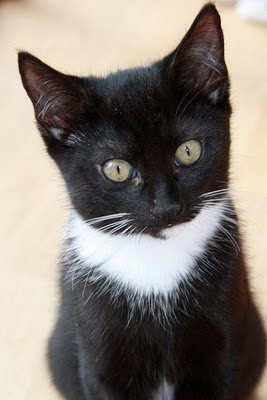 Dear George,
I am looking after an elderly human who has some health problems. I am finding it difficult to know when she is in pain. Obviously when we cats are in pain, we hiss, scratch or bite if somebody tries to pick us up. She doesn't do any of this when I crawl up the bed and sleep close to her. However she does make odd noises - sort of intakes of breath, wimpers and yowling noises. Is this pain?
Yours worried
Annie

Dear Annie,
Humans show pain in a different way to us. Apart from scratching or biting when being picked up, we stay silent. We don't make crying noises when in pain. That's because Nature has designed us to stay quiet in case a predator hears us and kills us. Look at it this way, a cat who cried loudly after a car accident would pretty soon be eaten by a fox here in the UK.
We are much much more stoic than humans, who really are pretty wimpish - another sign of their innate inferiority. We usually just go very very still - stay in our beds quietly resting, may not eat, and possibly have to pee outside the litter tray if it is too far away or too difficult to get into.
Humans are noisy and show their pain in their faces. You will see her face sort of twist up. She may have an intake of breath, as you have noticed. Some humans even shout, swear, yelp or cry. Poor creatures. Just not brave enough in the face of adversity.
There's not much you can do for her anyway, Annie. Go carefully on the bed, so that she isn't tempted to push you off. Purr loudly. That really helps a human who is lying unable to sleep. Purring acts as a kind of therapy for them. We have a responsibility to our pets so try to be helpful, even if you despise her lack of courage.
Love George
Posted by George Online Cat at 10:26 am 10 comments: 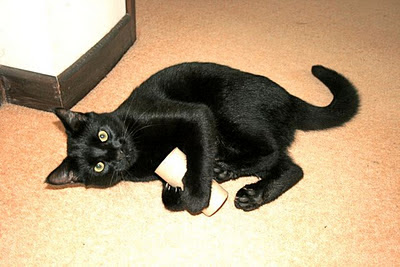 I regret to say that I still have no secretary. She is back home but totally doolally.... unable to think straight (she says), unable to type very much due to sore places post surgery, and, most of all, just exhausted. She even stopped eating for a few days and has lost half a stone (a bit of that came off with surgery, the easy way to lose weight.)
I have brought in several mice to tempt her appetite but to no avail. She sleeps a lot and I accompany her in this healing activity. These humans are fragile creatures. Occasionally she surfaces to do a very grumpy and bad taste blog about cancer.
Posted by George Online Cat at 11:44 am 13 comments:

I'm putting my secretary in the veterinary clinic 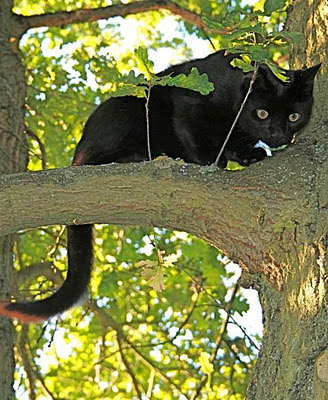 Dear Feline Readers,
Well, after about four years of regular blogging, I shall have to step down for just this week. My secretary has been ill and needs a surgical operation. On the grounds of human welfare, I have let her off this Saturday's blog. Instead she is helping me put up this notice.
Human pets are essentially unreliable. It is part of their inferior lifestyle that they get all kinds of infections and diseases. I know she hates going to the vet, and even more hates being put into a veterinary hospital. "It's for your own sake," I mewed. She didn't understand me, of course. Poor dumb creature. You can't explain things to them.
Back a week on Saturday. She has been told she can type then.
George.
PS. This is me trying to get that damn blackbird last summer.