Misbehaving and the night watchman.

Here we are - Yuppie & Anji – two cute brothers! We are almost 1 year old and share a house in Atlanta with a funny human pet!

We found your blog as being very informative, especially on human training.

Too bad we can’t spend too much time in front of a computer as we get easily exhausted.

Our human pet refuses to act as our secretary! What can we do? How can we train her? We also go for fancy things like…. acrylic nails covers! See, we are at that critical age when we scratch everything and feel the urge to shred everything to pieces.

We think this is fun but our human disagree…so we compromise.

Are these nail covers a good thing? Definitely they are better then declawing, but are they safe? George, we really need some advice and especially…. tips on human training!

You are the expert!

We have to scratch. We scratch to condition our claws, but we also scratch to leave messages - to our selves, and to any cats who happen to be passing by. It's an emotional thing. Scratching marks our territories not just visually but also with scent - which only we can read. We scratch when we are stressed and we want to feel better.

We British cats don't understand how Americans can possibly declaw their cats. In the UK it is a banned operation and any vet who did it would be in trouble with our cruelty laws. We don't much use nail caps here in the UK either - probably because most of us cats have access to outdoors and can scratch the local tree trunks. I think nail covers are safe, but they are a bit of a bore for both cats and humans. However, they are much much kinder than declawing.

Go for the natural kind solution. Instruct your human that you need a proper stable scratching post in every room where you might want to scratch, not just in one room. It must be large enough to allow us to stretch while we scratch. Don't let her get rid of an old scratching post. The tattier and smellier a scratching post gets, the more we cats like it. There is a depth of scent which a mere human will never understand. (Humans have pathetic claws, really pathetic!).

Some of us cats prefer horizontal scratching posts, or slightly angled ones. The surface has to be just right for us. People studying feral cats have noticed that they scratch along the walkways of their territory - but only on certain trees, not on others. Some trees just don't have the right physical surface. Incidentally, some of us enjoy scratching those roughly textured plant containers bought at garden centres (weighted down by a bag of sand in the middle). Some enjoy a tree trunk placed indoors. Others like cardboard scratching pads. Get that human of yours to offer you several kinds of scratching materials and see which you prefer.

Personally I enjoy the creative 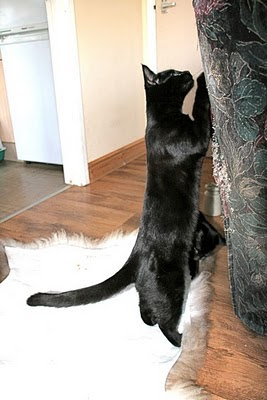 side of scratching armchairs, wallpaper and the side of the bed (so useful for waking your human up when it is time for an early hours snack). Here is a photo of me in artistic action. But Celia has fought back in a way I consider thoroughly philistine. She buys double sided carpet tape (or Stickypaws) and places this on the side of the bed or on the furniture. It feels really awful and I stop scratching on the site for at least a month, sometimes three months at a time. I had plans to redecorate the whole house with frilled curtains, frilled soft furnishing and really nice catseye-level frilled wallpaper - and she put a stop to it.

Humans.... they don't get it do they? What a selfish species.

There's a big Facebook group Claws 4 Paws. Join it to show you are against declawing.

Why buy scratching posts when furniture is better? 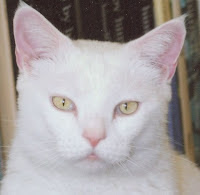 Dear George,
Coud you advise me how I can dissuade my human from investing her money on scratch posts and balls with bells. Furniture and a length of string, or even a shoe lace, are perfectly adequate. The money could be far better employed on chicken breasts and plaice.
Vincent

Dear Vincent,
It is one of the most irritating things about humans that they buy us presents they think we ought to like and then are amazed when we don't like them. The scratching posts they buy are almost always too small or, if they are large enough for what I call a full-body scratch, then they are usually too wobbly. There are some quite nice cardboard ones, which are at an angle to the floor but when my human installed one and I used it vigorously, she took it away because she said the cardboard pieces were messy. Apart from these my own preference is for the sisal ones but some cats prefer the carpet covered post. AFter scratching the carpet post for a time they then discover scratching that the real carpet is much more pleasurable. And the humans are surprised! Yet they encouraged this by buying the carpet-covered post in the first place!
Worse still, if we do condescend to use one of the posts, just when it is getting nicely smelly from the pads of our feet with interesting bits falling off it, the humans change it. We like scratching posts with bits of sisal or carpet hanging down. We like to see the results of our scratches! But just when we have run in the post, so to speak, they get rid of it. They throw it out just when it has been scratched to our idea of perfection. What fools they are! Then they are amazed when we refuse to use a new one.
So what can you do about it? Very little, I fear, Vincent. Just never EVER use it. It is always good for humans to have their wills thwarted. It keeps them in training. I never use a new cat bed for at least three months or more. I turn up my nose at any new toy. And I particularly boycott anything expensive which is bought for me. It keeps humans in their place.
So ignore those balls with bells. Why should a cat want a rolling ball with a bell? We are neither dogs nor vicars. Continue to use the furniture for scratching. If there is no string available as a toy, pull out a shoelace or two, preferably while the shoe is on the foot.
Oh yes, have you thought about scratching the wall paper. A wall with strips hanging off it is a lovely sight. It makes a room look like an art installation.
George
Posted by George Online Cat at 6:08 pm 5 comments: