I'm handsome and affectionate - so why can't I find a home? 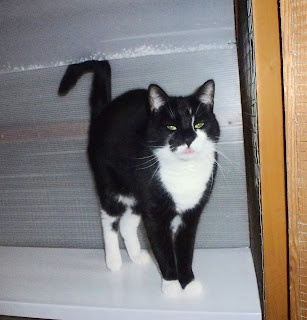 Dear George,
My name is Chilli - but I am gentle not peppery. I'm loving. I'm handsome with wonderful white whiskers but here I am stuck in a cattery without a human pet.
Can you give me any advice on how to get out of here.  And how to purrsuade a human to be adopted.
I want to get back into the real world again.
Yours
Chilli.

Dear Chilli,
The first step is to get noticed. As people pass your pen, you must make them stop to take a look at you. This requires you either to walk to the front of the pen and miaow. Or  if you are sitting on a ledge nearer human eyesight (which is uncomfortably high) as well as the miaow you must do something unusual. Sitting back on your haunches might work. Or better still standing up on your hind legs.  Putting a paw to your eye, as if wiping off a tear, might also work.
Once you get their attention, you can begin purr very loudly indeed. You already have your tail in the correct tail-up position - the position which tells them that you like them. If you are near the wire of the pen, go right up to it and rub.
If possible roll over and expose your tummy to them, always giving them eye contact at the same time.
Miaow some more. And some more. In between the purring. Humans do a lot of vocalisation so this is likely to appeal to them.
Yours cheerfully
George