Of cats and catteries - and how to survive them 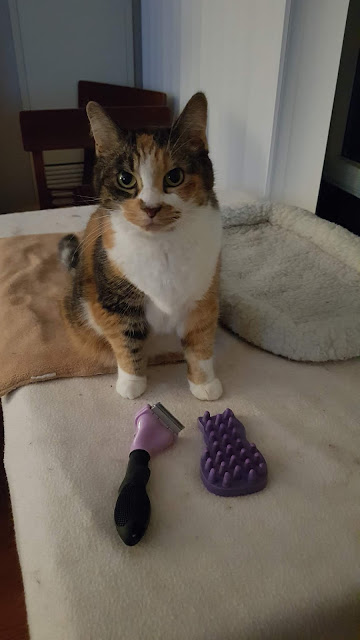 Dear George,
I have two questions for you. First: why do humans have that need to wonder away from home for two weeks or more at a time? They call this “holiday” or “vacation” – depending on which side of the pond one lives!
Second: why do they think that placing us in catteries or boarding us on veterinarians’ offices each time they get this “wandering away” itch, that they re doing us a favor?

Hope you can shed some light on the topic as I was put again in a cattery and I came back home sick from the food I ate there. It wasn’t fun. Now, my human is trying to bribe me with two new brushes (as you can see in the photo attached). I love brushes and I love being brushed!
But, I’ve heard of and read about “live-in” cat-sitters or friendly neighbors who come twice a day or even a professional sitter who would come 2-3 times a day to check on us, feed us and clean after us! I rather stay in my home/territory than sharing the space with other cats while we are all constrained in cages.
She doesn’t do me any favor! How do I tell her?
In gratitude for your advice
Shumba

Dear Shumba,
Catteries? I call them prisons. Hateful, hateful places smelling of disinfectant and other cats. The sheer horror of the smells makes me feel sick. Humans are so nose blind that they don't even realise the stress of the new scents. My human does the same to me. Locks me up in a cat pen. She hasn't got a reliable sitter. I have a cat flap at home, so she feels I might leave home if she deserts me to go on one of her "holidays." And what a shameful dereliction of duty, that is!
I suggest you punish her when you get home. Refuse to talk to her. Refuse to sleep on the same bed as she does. Turn your back on her as much as possible. You might also, if you are very very angry, spray on her bed. Humans hate this: yet all we are doing is mixing our scent with theirs in a masterful exaggerated way. Try it! But make sure you do that first thing, so she links it with having been in the lock-up.
How to survive in the nick (ie a prison cattery)? I always take my own food with me. And my own bedding. And my own toy. And sometimes my own litter, too. It helps to have a little scent of home in these hostile surroundings.
Yours
George.