Why does my human keep inviting other humans into the house? 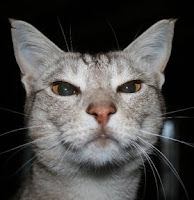 QUESTION; My human keeps inviting other humans into my territory, the house. I don't like it. They turn up at all hours. She encourages them by feeding them cups of coffee and they vocalise endlessly. It seems like hours, and sometimes it is hours, before I get any privacy. It's my house, my core territory, and I wish I could stop her doing this. I don't invite stray cats into her territory. I keep them out. What does she think she is doing?
Ziggy

ANSWER
You have to try and be compassionate, Ziggy. A good pet owner, and I am sure you want to be one, tries to understand the needs of their pets. Human pets are obligate social animals. They have a dominance hierarchy (a loose one normally) and they spend a lot of time interacting with each other. It sounds as if your human lives alone. She will literally NEED other human company.
We cats don't do this. In wild conditions we hunt alone. We don't share our prey (like mice) with other cats, except when we are feeding our kittens. Sometimes we live in groups, if there is enough food going. But even in groups, we stay in little families. Some of us are true loners. But on the whole we are flexible. We can usually live with other unrelated cats, - maybe not as friends but as friendly acquaintances. But we don't need feline friends.
You have got to accept your human as she is. She hasn't got family in the house so she goes out and finds substitute family, brings them into the home, goes through the behaviour pattern of feeding kittens with them, and vocalises. Vocalisation for humans is a bit like grooming. They go in for mutual vocalisation. This motor pattern is part of the human ethogram.
The social company, kitten-feeding and vocalisation motor patterns are hard wired into them, Ziggy. You've got to allow her to do her instinctive behaviour. Just count yourself lucky that she's not seeking a mate. When humans go calling (for sex) it's incredibly difficult and embarassing for us cats! More on that later.
George
Posted by George Online Cat at 9:32 am 4 comments:

Why does my human pull my hair every day? 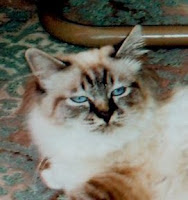 QUESTION:
Every day I have to run and hide behind the fridge. My human then hauls me out, dumps me on her lap, and starts pulling out my hair with a metal implement. Why does she do it? It hurts? Of course, I try to wriggle free but I can't. So I freeze with misery and just let her do it. Why do humans torture cats in this way?
Jasmine.

ANSWER:
You have to assert yourself, Jasmine. It's not enough to run and hide. Take back your power as a cat. Have pride in yourself. This is a claw and order situation. Claw her. Bite her. Hard.
Why does she do it? She thinks she is grooming you. Have you bothered to look how she grooms herself. She uses the same metal implement or something like it. She pours water on her head. She then puffs hot air on it. Some humans even use hot metal combs. Then they hiss sticky stuff. It's almost unbelievable, except for the fact that they haven't got hair in the right places. They can't use their teeth and tongue on themselves. Can't reach those pathetic few tufts of hair, you see. It's really very sad for this highly dysfunctional species.
But if they had any consideration, they would use tongue and teeth like we do when they groom us. They could easily lie on the floor and lick our fur. Use their teeth to tease out a few knots. Why don't they? It's just too much bother. The servant problem for us cats is really difficult. Humans are lazy creatures. I don't know that I have ever heard of a successful training method for this problem.
Which is why I recommend use of teeth and claw.
Posted by George Online Cat at 7:02 pm 12 comments:

Cat Question: What if my humans move house? 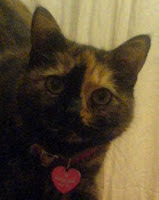 Dear George
My primary care giver has been talking about "moving house". This has been going on ages now and they may not get round to it but I'm not sure I approve. I have everything I want here, although the large garden which is mentioned sounds good. What do you think?
I would rather not dump them as I am not going back to the streets and like the regular meals, cat flap, litter tray at this cold tie of year and sit down cuddles/ treats on the sofa. Plus I got tuna for breakfast and a new toy recently - a flat mouse shaped leather tag on a leather string, it came with a "work/documents" file which is useless for playing with so the human got that, I think my end of the deal is best. The flat mouse is good though, and smells nice and animal like, so the humans are worth holding onto.
Smudge

ANSWER:
The human obsession with moving house shows their complete inability to grasp the meaning of territory. "Territory is security" is a well known saying among wise cats. We need core territory, a place to eat, sleep and if necessary hide. We also need the home hunting range. We know the home range intimately - the patch of ivy near the garden shed where a family of wood mice hang out, the box shrub that smells like cat pee so we mark on it, the garden wall next door where we can sit and terrorize next door's smaller cat, the frightening front steps near the pavement where passing dogs leave THEIR marks. We know it. We love it. We feel happy in it.
Moving house just ruins everything for us.
Consider your options. Is there a friendly neighbour you could move in on? Is this the time to develop a huge and very visible series of panic attacks? Run from even the slightest noise, hide under the bed, make strange wailing noises? This might persuade your humans that you are going through a nervous breakdown and should not be moved. Also pee on the property pages of the newspapers NOW. Show them what you think of the idea. When they are consulting websites like Prime Location jump on the keyboard with all four paws to make them disappear.
Posted by George Online Cat at 6:39 pm 1 comment:

Let's start at the beginning? What is a Human? 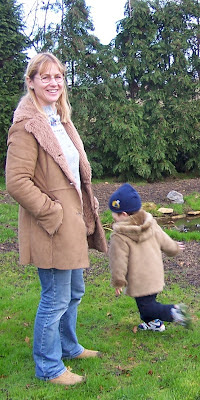 In my new role as pet behaviour counsellor, more accurately human behaviour counsellor, I feel I must start at the beginning. I invite your comments and questions, as ever. I will attempt to answer at least one question a week, interpretting human behaviour in a way which may be helpful to us cats.
This is a female of the species with her young one, a junior male. I chose a female, because probably most of us cats choose to live with the females. Males are more likely to be roaming round outside the house. Females spend more time indoor especially when they have a litter of children. While there are wonderful exceptions - males who are house husbands or just properly devoted to cats - females probably make the best choice for the cat starting out with a pet. Females are more submissive in nature, though surprisingly stubborn at times. The cat that is experienced in training and caring for humans, may well want to choose a male. Males are bigger, more challenging, yet surprisingly easy to train once feline superiority is properly established.
If we are to understand human behaviour, we need to look at the species. Like us they are warm blooded mammals. They belong to the ape family. Unlike their fellow apes, they do not have fur. On the basis of this, it has been argued that Homo sapiens is a neotonised ape, ie an ape that has stayed immature. (if apes were insects, the human would be in the larval stage, so to speak.) This relative immaturity will be obvious when we look more closely at human behaviour.
Why are humans given the taxonomic name of Homo sapiens? Why indeed? It is clear to any right thinking cat, that this is indeed a misnomer of the first order. But the reason for it is obvious. Human beings named themselves so. It is as if we cats sat down and decided we would be Felis sapiens. Obviously the second half of the species name would be more applicable to us than them. But, as I have said, humans named themselves. And the choice of name is one which underlines not just their innate immaturity but their innate arrogance.
It's worth pointing out that not only is the human adult in many ways immature, but this immaturity starts very young indeed. Any kitten, however bad its start in life, is startlingly mature compared with human infants. Kittens mature somewhere about 8 weeks, while humans take about 8 years to get to somewhere near the same stage. We will look more closely at this in later posts, because this too is relevant to our experiences with human behaviour.
Posted by George Online Cat at 11:18 am 2 comments: