Look at this - it's almost as big as I am 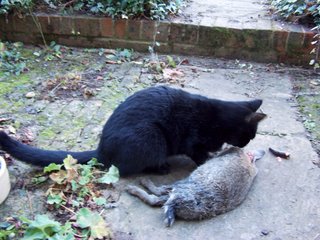 This was the day of days, the moment when my life reached the pinnacle of success and triumph. I caught a full grown adult rabbit. My first. It was so huge I couldn't get it through the cat flap - which is why the photograph is poor. Celia was in an inexplicable mood. Instead of welcoming me home as I dragged the dead body right down the farm track, she shuddered and ran indoors. So she would only take the photograph through the door. That's why it is bad quality. She let me down.
Indeed her emotional reaction was really perplexing. On the one hand she called to Ronnie, with a real note of pride, saying "Look what he's caught." Then she said: "That's good news for my vegetable patch." All well and good. Then came a series of remarks suggesting that she had had second thoughts. "At least, it's dead. I just couldn't bear it if I had to dispatch it." Then: "I wish he wouldn't kill everything."
The woman can't decide whether she's proud of me or upset by me. Talk about conflicting emotions. You see she wrote a book called "One Hundred Ways to a Happy Bunny" because she loves rabbits. Ånd she's connected with the Rabbit Welfare Fund. So she is actually as fond of bunnies as I am - only in a rather different way.
It all rather spoiled my triumph. Who'd keep humans as pets. They are so devastatingly irrational.
Posted by George Online Cat at 4:58 pm 1 comment: 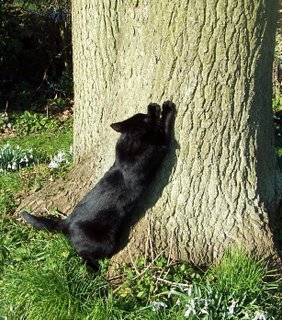 I like a good scratch. There's the sheer pleasure of scratching upwards, stretching my whole body and raking down my claws, loosening up the bits of nail which I shed. Then there's the power of the scratch message! I often do it in front of William to show what a big cat I am. He can hear me scratching. He can see how tall I am and he can also smell the scent of the handsome black pads on my paws. When he's feeling competitive he scratches over my marks, but since I have got bigger, it's more likely to be the other way round. He puts on his scratchmarks to say "William was here" and I then put on mine, saying "George was here and he can scratch a good deal higher."
Scratching is also a good way to get Celia's attention. In the morning, I do it on the scratching post in her bedroom - around 6.45am for starters to make sure she has woken up after the newspapers arrived. It's the feline equivalent of the speaking clock. "At the first scratch it will be 6.45am." This is only a Force 1 wake-up message and she often goes back to sleep. So do I sometimes, when I don't choose to proceed to Force 2 wake ups and others up to Force 9 (biting her face).
Scratching as a way of getting her attention, rather than William's, works well in the living room. I have a perfectly good scratching post which I can use to shed my nails. Anyway I use the tree for that. But the living room has some very nice scratching furniture. I scratch down the end of the arm chair. Once. Twice. She's noticed. Bingo! I have her full attention. She shoos me away but I don't care because it has worked. She has noticed me.
Then she puts double sided carpet tape on the furniture. I hate scratching sticky surfaces. This is one of the rare occasions when she outwits me. But she thinks it looks unsightly (luckily) so after about a month she will take it down and a few weeks later I will scratch again in front of her.
Oh the games humans play! Little things suit little minds.
Posted by George Online Cat at 8:31 am No comments:

Documents - for sitting on 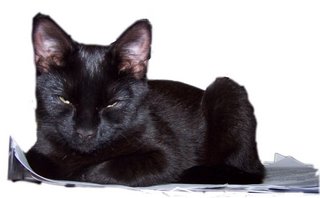 Documents spew out of Celia's printer all the time - white paper with little tracks on them rather like the markings left by very very small birds only far less interesting. Their use to a cat is to sit on. I learned this pretty quickly as a kitten and I might add that I have left my muddy paw mark on many of Celia's documents.
Why are they useful for sitting on? For one thing the paper is smooth and gets nicely warmed up with feline body heat. Unlike carpets there is no static electricity even if it's not quite as warm as carpet. But mainly documents are useful as a way of catching your human's attention.
As most of you cats reading this will know, humans spent an inordinate amount of time staring at a screen or watching paper come out of the printer. Mildly interesting as it is not unlike something coming out of a hole. I sometimes poke the printer when the paper is coming out and Celia says that Fat Ada (my black and white predecessor) used to sit on the printer in the days when they were big rectangular devices. Usually the printer ground to a halt, suffocated by the sheer weight of cat. Ada was large, very large.
I don't sit on the printer much. It's sort slanted and not very comfortable. I sit on documents. This never fails. Celia looks at me and laughs, or swears sometimes. Then she leans over and picks me up and gives me a cuddle. She can't resist.
It's so easy.
Posted by George Online Cat at 10:08 am 1 comment:

William has his say on using catnip moderately. 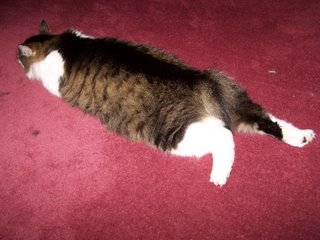 George has unfairly described me as cautious when it comes to doing catnip. I am not cautious; I am a simple recreational user who knows when to stop. I can control my drug use (unlike some cats) and I use catnip moderately. At the age of 11, I have discovered that bingeing on catnip doesn't suit me. I prefer a more sophisticated approach of savouring it slowly and sort of rolling it round my nasal passages analysing and enjoying the odour. Besides, if I binged like he does, I would in danger of becoming a victim of feline violence - from him, who else?
As I have explained before, George is an intemperate and silly adolescent. He keeps pouncing on me even when it is absolutely clear that I resent this harassment. So when the catnip mice arrived, I had a nice little sniffter. I indulged in a couple more and then I decided enough was enough. George, on the other hand, went on to take a skinful of the stuff. He rolled, chewed, kicked and generally behaved in a ridiculous way. He was completely stoned. He admits to being a bit of a catnip junkie - which I think is truer than he lets on. It's a good job there weren't any small kittens about because it was a disgraceful exhibition.
As I said, I had a sniffter or two and that was enough. I felt very relaxed. And then I felt sleepy. It was rather hot near the fire, so I fell asleep, as I sometimes do, on my tummy. I had a very pleasant dream of being the only cat in the household.
Posted by George Online Cat at 12:48 pm No comments:

A word about those catnip "mice"

The catnip through the post came packed tightly in little sacks with a convenient string attached for dragging them around, pouncing on when high as a kite, or just pawing when out of it. Nice little sacks. Nicely made by a well wisher, who has seen my handsome photograph on this blog and wishes to pay her own small tribute to me. I have enjoyed, and am still greatly enjoying, them. Doing catnip is great.
But... Celia thinks they are mice. She calls them catnip "mice." She's got the same delusion about two or three little furry toys which I sometimes play with when there's nothing to kill outside. Of course, they are not mice. They don't smell like mice. They smell, of course, of old rabbit fur - probably oriental or maybe Chinese rabbit and been dead a long time. I reckon the fur has been stuck on something a bit like cardboard. I mean they are fun, but they are not mice. Neither are the little catnip sacks.
When I came to, after doing some more catnip earlier today, I pondered on this. I mean if it doesn't smell like a mouse and it doesn't move like a mouse, it's not a mouse. I think her delusion arises from the fact that humans have practically no sense of smell. They can't tell the difference between friend and foe by smell. They can't smell intruders or next doors' friends. They can hardly smell anything at all. They are smell-blind, so to speak.
Nor can they hear. They are deaf to a mouse's footfall. If a thing doesn't sound like a mouse, it's not a mouse. But humans are almost insensible. The only sense they have is vision. Even their sight comes in glaring colours and is not movement sensitive, so they can't see much at twilight hunting hour. Lacking smell, hearing, sensitivity to movement, Celia looks at a little sack of catnip and she "sees" a mouse, just because of the shape.
How weird is that? Poor woman.
Posted by George Online Cat at 6:36 pm No comments: