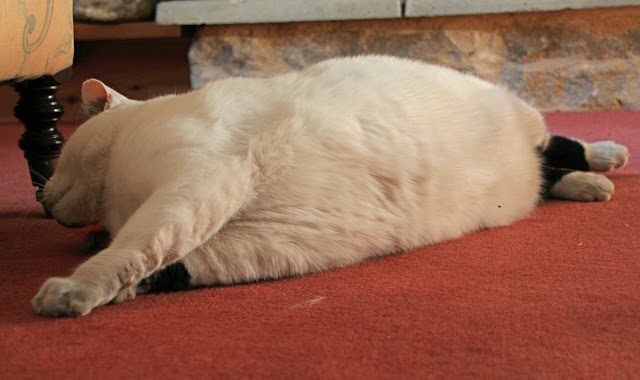 "Fat cats" is a human insult towards other humans that are paid too much. That phrase has unfortunately been used in connection with my own shape. Inaccurate, because my boxy shape is just the fact that I am a pedigree British type.

Obesity - not just a bit of chubbiness - is a common problem for cats (and humans). Particularly those of us who live indoors and are not allowed out to go hunting and killing. There just isn't much to do except eat.

My friend, Boomer, pictured above was such a cat His human suffered from Alzheimers and couldn't remember if she had fed him or not. So Boomer ate many meals every day.

He finally had to go on a diet. The vet prescribed a diet food that was weighed out every day and he got nothing extra. What he did get, however, was the fun of "hunting" it. Nothing was put in a bowl: it was scattered over the floor or put in a food dispenser.

He had to get his food from home made dispensers - a tennis ball with a hole cut in it, pizza package with wholes, a cardboard pill container with the food just put inside, a large box which he had to jump inside, the windowsill so he had to jump up to it, a plastic water bottle with holes in it and lavatory rolls with holes.

He frequently asked for more food and his requests were not ignored. Instead, he was offered games with fishing rod toys.

His before photo is at the top of this blog: his after photo at the bottom. There are more photos at www.catexpert.co.uk under the heading of "Indoor only cats." 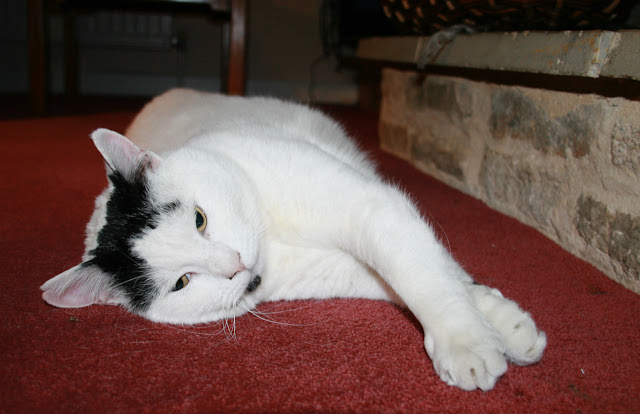 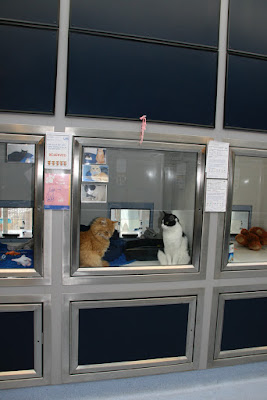 Humans in lockdown have been paying silly prices for puppies and kittens. Just for the fun of caring for an exciteable cute companion.

As a qualified human behaviour counsellor, this fills me with despair.

Some, perhaps many, of these furry babies will end up in an animal shelter when their owners get bored or have to go back to work outside the home.

Meanwhile there are plenty of beautiful adult cats needing homes. How do we get the message across to dumb humans, that these need homes too and have plenty of love to give. If the human goes  back to work, most adult cats can cope very well as long as they have a cat flap.

The advantages of adoption are obvious. It costs less. If a human adopts an adult cat, it will know more about the cat's individual temperament (you can't tell with a kitten). There is a greater choice. The cat has already been spayed and neutered. She/he has been vet checked and should be free of disease.

Humans should check out the animal rescue before adoption. Charities will be registered with the UK Charity Commission and can be checked online. If the rescue is not among these, don't go to it.

Rescue places that have rabbit hutches, old cages or crates with cats should be reported to the RSPCA. So should any human who is operating from a house with more than 20 cats in it. Report these to the RSPCA so that the cats can be rescued and rehomed via a reputable charity. 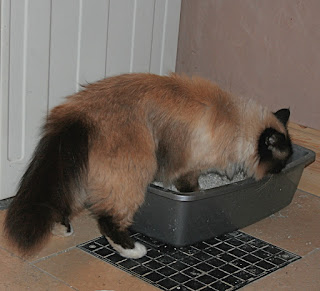 litter tray. We often have to stand outside the tray in order to have the room to do a proper dig. Sometimes it is even worse and the small tray has a top to it so that we can barely turn out.

And turning to look at what we have done, before neatly covering it up, is natural behaviour.

Worse still a recent survey of UK pet owners showed that 64% of the owners who had more than one cat only put down one litter tray. Normal deposits for a litter tray would be between 3-5 dumps (both kinds) so a single tray would be filthy very soon.

Give us one tray per cat. And one extra just in case.

And, purlease, clean up twice a day. 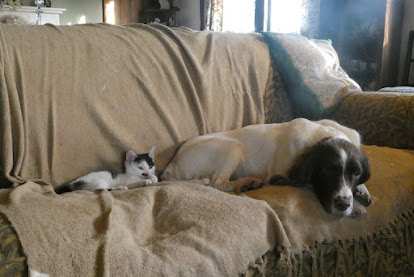 There are dogs everywhere I look. Most of them still puppies or juveniles. Feline friends of mine have had their lives ruined by dogs suddenly appearing in their household.

Am I being unfair to another species?

A dog in the household, under proper control by the cat, can provide valuable services - a warm body to sleep near or even on top, garden security to see off other cat intruders into the house, and a greater choice of beds. 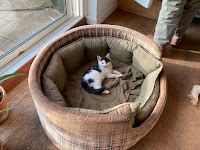 Even the smallest kitten must make her dominance evident from the start.

But the sudden intrusion, into a hitherto happy home, is nevertheless upsetting. Threesomes are not to every cat's taste.

Disloyal humans, in search of a more sycophantic pet, may enjoy canine companionship. We often don't.

It won't end well for the dogs.