Danger..... Easter eggs can kill you. 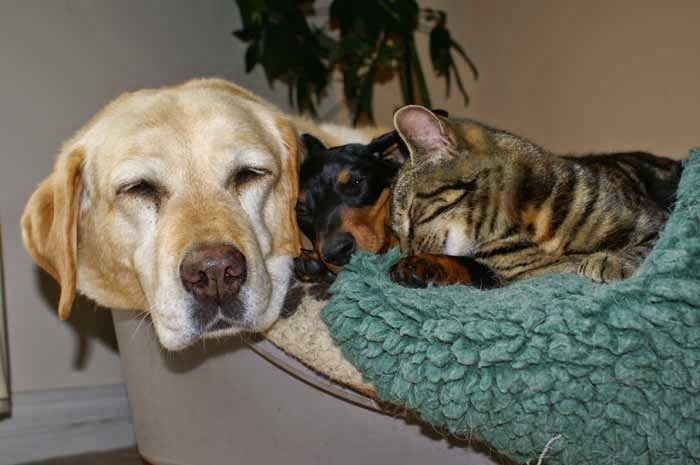 Dear George,
Please would you warn your readers about next week. Humans go slightly mad on the food front. It's painful to see them sitting down to large meals of roast lamb followed by creamy deserts, while we cats and dogs just have our normal envelope of soft food or a handful of dry kibble.
Naturally, I keep an eye out for any crumbs that fall off the table or the kitchen surfaces - if I can get there before my friend, Daisy the dog. She's a Labrador so she will bolt down anything - bread, chips, potatoes, sprouts, fruit, and..... chocolate.
That's what she did this time last year. She found an Easter Egg on the coffee table, tore off its wrappings and ate the lot.  I didn't get a look in.
A few hours later she was shivering, breathing heavily and wandering around restlessly. Luckily the humans returned, found the wrapping, and rushed her to the vet. She survived.  This chocolate turns out to be poisonous to dogs, cats and even parrots.
I felt pretty smug that I hadn't had so much as a nibble. So warn your readers not to touch that stuff. It's dangerous.
Yours
Tabitha.

Dear Tabitha,
Humans make pigs of themselves with chocolate. And they are hopelessly irresponsible about leaving it around. Odd, isn't it? They can eat pounds of the stuff without getting ill - though they do get fat. Apparently the chemical, theobromine, gives them a high but doesn't hurt them. To us, it can be deadly.
Apparently most vets in the UK have to treat pets for chocolate poisoning this time of year. And warn Daisy about grapes and raisins.  Most humans don't know that these too can kill dogs and probably cats too, if we were silly enough to eat them. There's information here.
As for the selfish behaviour of humans around food... it never ceases to amaze me. Here I am stuck with the same old cat food day by day, while they feast on takeaways, roast dinners, and exotic dishes. Of course, I steal what I can. What cat wouldn't?
But I shall stay away from chocolate.
Yours
George.
Posted by George Online Cat at 10:11 am 6 comments: