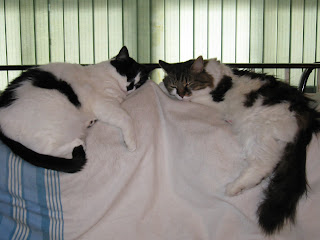 Few days ago we came across a beautiful photo album that was given as a Christmas gift to our friends, Rafael & Yeminai. The album contains photos with cats; lots of cats, past and present! All were rescued! We’ve seen how they looked before and after.

All this wonderful work was done by one single person, Jon. He looks like a big, quiet “teddy bear” who shares his heart, his house and his food with all cats.

He doesn’t expect anybody’s help but it is grateful if someone does, like Rafael & his wife. On the inside cover there is a beautiful “mission” statement which we will like to share with you! It is called “I am an animal rescuer”

“My job is to assist God’s creatures; I was born with a need to fulfill their needs. I take in new “family members” without plan, or selection. I have bought cat food with my last dime. I have patted a mangey head with bare hands; I have hugged someone “vicious” and afraid. I have fallen in love a thousand times, and I have cried into the fur of a lifeless body. I have “animal friends” and friends who have animal friends.

I don’t use the word “pet”. I notice those lost on the side of the road and my heart aches.

I will hand raise a field mouse and make friends with a vulture.

I know of no creature unworthy of my time. We are a quiet, but determined army that is making a difference every day. There is nothing more necessary then warming an orphan, nothing more rewarding than saving a life, no higher recognition is needed than watching them thrive. There is no greater joy then seeing a baby furry play who, only days ago, was too weak to eat. I am an Animal Rescuer….. My work is never done, my home is never quiet, my wallet is always empty, but my heart is always full” – by a fellow cat rescue worker, name unknown.

George, on behalf of all our rescued fellows we want to show our gratitude and say:

THANK YOU JON with love from cats.

I owe my life to cat rescuers like Jon. I was from a litter of kittens rescued and taken to West Oxfordshire Cats Protection. Without their help I would probably have died. Mother cats, from homes where the humans don't bother to spay them, often leave home to find a quiet place to give birth. Most young kittens born in the wild do and even if they don't, their mother will often die exhausted by the effort of feeding and finding food for her little ones. I don't even know what happened to my mother. I was bottle fed by Lou and then I adopted Celia.

Since then I have trained her to help by taking photographs of cats that are ready to adopt a human. If you click on the website you will see some of them. Of course, humans being dumb self-centered creatures, she has written them up as if they are the adoptees, rather than the adopters. But one has to make allowances for human stupidity.

Humans who rescue cats often get criticised by their peer group. They are told they should only help other humans not cats. I say that helping cats is the highest occupation that a mere human can aspire to. What else would they do? How else can they show the natural deference and appreciation of a lower form of life for the highest feline form of life? It's natural for them to want to help, feed, groom, and generally adore.

Besides since we have domesticated them, they are so much happier. Jon sounds like a really lovely pet. You humans out there would do well to imitate him or at least help people like him by letting yourself be adopted by a shelter cat.

PS Here is the petition to sign in favour of prosecuting the tourism company that slaughtered 100 sled dogs - http://www.thepetitionsite.com/1/prosecute-for-the-senseless-slaughter-of-100-sled-dogs/