At last - the British Prime Minister gets expert help. 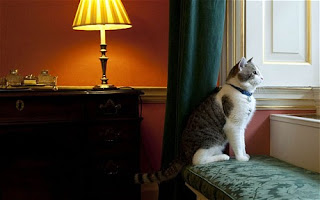 We would like to congratulate your PM for selecting a cat for the top job. We, CATS, proved again to be intelligent, reliable and superior in every aspect to any other species! Downing Street No. 10 has brought in Larry the cat to clean up the (mice) mess in the British Prime Minister’s official residence.

What is even more thrilling is that Larry is a rescued stray who, lately, was living at Battersea Dogs and Cats Home. He was recruited based on his abilities, capabilities and street-smarts skills. H 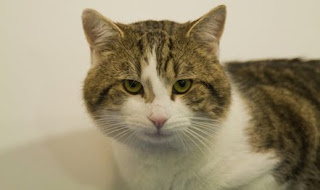 e is the TOP CAT! He will be looked after by the whole stuff at Downing Street. He will run of most of the offices and official rooms as well as the garden. He also is in charge with training Prime Minister’s young children!

He proved to be fully qualified to cope with the demands of daily life at Number 10!

He made headlines in North America! Congratulations Larry!

Yes, at last we have an intelligent species at the top of human government. We may be able to get through the human recession, now that political life is in a safe pair of paws. I have had a word with Larry, and he tells me that he is very slowly going to take over the reins from the PM. His plan is to infiltrate himself into the heart of power.

The cabinet, those humans appointed by David Cameron, may take rather longer to subdue. However, he tells me that he will start by simply attending cabinet meetings. To lure them into acceptance of his presence, he will pretend to be asleep (goodness knows, human politicians are boring enough). Later, he will make his presence felt - his innate charisma will probably do the rest. At the moment he is taking a very careful look right round his territory and teaching the policeman at the door of Number Ten Downing Street to let him in or out, as required. Until the basics are in place, he cannot start his true work.

The press have been intrusive. Provoked by this, Larry has naturally responded with claws to a particularly ridiculous TV reporter. Quite right too. The press need to be kept in their place. He says he strolled into a press conference at Number Ten and the Downing St staff took him away, because his mere presence detracted from the human goings on. He is conscious, as we all are, that cats will always steal the camera's attention!

There has been a lot of idiotic comment in the human blogosphere about his ability, or otherwise, to catch rats. Some particularly stupid woman wrote to the Daily Telegraph to say that cats didn't catch rats. If I had lived near her, I would have taken her one as a present - like the one I brought into Celia's kitchen. It ran up the corner of the kitchen wall right to the beams, then fell back into the Wellington boot she was holding below (a rare occasion of human skill).

I'm sure all us cats will want to wish him the best. At cat purporting to be Larry can be found on twitter. His website cannot be far behind. All us cats hope that his arrival at Downing Street will encourage people to adopt from a rescue shelter (read Wicky Wuudler in the comments below).

PS. For more details of Larry go to Battersea Dogs and Cats Home. They provided the close up photo.