Introducing the sticky crunch of newts 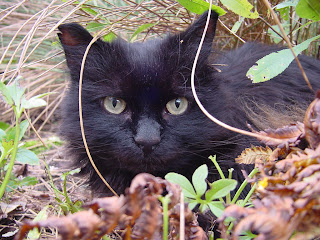 Dear George,
When I first came into the kitchen with a newt thrashing about between my gums, my humans were – heaven knows why – shocked rather than grateful. Even though I have no teeth I managed to munch it with my gums and swallow it down. I made my trademark hunting cry of “marrp” in celebration.
Later I saw my companion Whicky Wuudler batting something about and stamping on it – he’s a real back paw stamper and his hocks are legendary for dispatching moles. Sure enough he’d got a newt too – only just a tiny one. The humans tried to interfere AGAIN. He ate it, except for one tiny foreleg. Next Oliver brought a live one into the house, whapped it around growling and took off at high speed when our humans interfered. He ate it too!
Why can’t they understand…. Newts are good to eat and fun to hunt. We bring them in to show them off to our two apes. Whicky left that leg out of the goodness of his heart so that they could have a nibble. Did they? They did not. What's more, a day or two later, the newts had totally disappeared! What’s wrong with these apes, George?
Love Gerry

Many humans, or apes as you so nicely call them, seem to think that newts produce a foul tasting mucus to deter predators. They don't. I think they have them confused with toads, which do taste horrible, though frogs are quite nice if you like that sort of 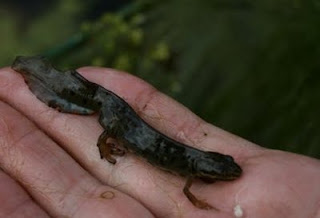 thing. Some humans even eat them - though they are so unsporting as to buy them frozen in frenchy supermarkets rather than going out and hunting their own. All too typical of this species. You call them apes: I call them Homo stupido.

Do you actually fish your newts out of the water, or do you just wait till they come on land and get them then? I know of cats that will clear a small garden pond of all goldfish. Fanny brought in a goldfish, left it on the kitchen floor where it was found by the humans. They placed in a tank and it survived for a further 15 years. It made interactive piscal TV for Fanny!

And I even heard of a cat that brought home a two pound koi carp, which was probably worth thousands of pounds if it had the right markings. Its humans never dared to confess to the crime.

Newts, frogs and toads will all survive cats (apart from the occasionally unlucky individual) , if there are enough hiding places for them in a garden - long grass, wood piles, stone walls etc.

I have never tried back stamping. Can your apes take a video of it so I can post it?