What is this weird human behaviour? 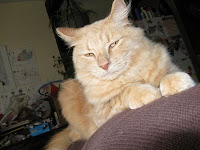 I've heard this weird story from a friend whose human visited another cat lover. He reached down to pet her cat a couple of times gently, and had to defend himself as he was about to have 12 lbs of kitty wreak havoc on his body. The woman grabbed the cat and sat down on the couch, proceeded to put the cat on his back and rub his tummy till he calmed down. While she was doing this - and this is the crazy part - she held a pencil between his teeth. I guess the wood was flying, bits going all over the place. He chewed for a few minutes then was calm again. She apologized and said he had quite a temper and this was the only way to calm him. Is this some new Dr.Phil for cats technique? Or do I just lead a sheltered life? Whatcha think, George?
Goldie  http//:sumacstories.blogspot.com
Dear Goldie,
I think this is just another example of mad and bad humans. Most of us who respond badly to petting are doing so because we are frightened of humans and want to keep our personal space. We may look vicious but we are scared. Personally I like being petted by strangers (I've been criticised for being too much of a human lover)  but many cats do not. They were not brought up in kittenhood to enjoy the promiscuous caresses of passing humans they do not know. So they strike out in order to get humans to retreat - a very effective technique.
What does this woman do then? Grab the cat,roll  it on its back, forcibly pet its tummy (its most sensitive area!), and in order to avoid being bitten (an appropriate feline reaction, in my view), she thrusts a piece of wood in its mouth. A calming technique? Cruel, I think. There is a danger that the cat will break a tooth. There is the emotional damage of being handled in a rough way and forced to comply.
Although I am a cuddly cat, I hate being tickled on my tummy. Most cats do. Sometimes I will allow a little bit of petting there but mostly I respond by grabbing the intruding hand and biting it. My tummy is a no go area and (except for the very occasional caress from Celia) I am the only one who is allow to clean it or touch it. This poor cat, who is already frightened by strangers trying to caress it, is now unable to bite because it has been forcibly gagged. I am amazed it calmed down - perhaps it was freezing with sheer terror.  Cats that are unable to escape do sometimes freeze and go motionless.
The whole story is horrible.
Posted by George Online Cat at 9:21 am