Cat kills viper - beat that, all you cats out there! 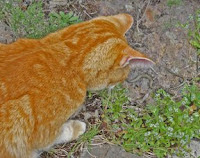 Dear George
My name is Clari and I am a serial viper killer. A great ginger hunter. Of course I catch lots of mice. They just need total patience sitting guarding a mousehole in the fields around. And as for rabbits, there are very very few around here in this part of the Catalan border, but I did once catch a hare that was the same size as me. I brought it into the house via a barred window and two doors which I know how to open. It was a huge hare. Lizards are indeed a mere nothing to me despite their speed. My speed of reaction is phenomenal, quicker than the eye can see at times. It needs to be because I also go for the dangerous ones. Snakes. It's a real rush. The excitement, the adrenaline - there's nothing like it. It is the ultimate hunting moment. A cat has to be quick as lightening not to get bitten. And if you get it wrong, it's death by adder.
Vive la chasse! And then some.
Clariboys
Dear Clari,
You win the all-time award for feline hunting trophies - the George Cross. Due to human laziness on my staff, the actual medal has not yet been cast. I have talked to Celia about this and I will give her another telling off, and get her to jump to it. In the meantime I will put you on the George roll of honour and you will be in my next book. Hunting exploits with this degree of dashing fearlessness should be recognised and immortalised. A dog couldn't do this. It would just end up with a poisonously swollen nose. Only we cats have the swift responses to take on snakes.
I've talked to your human who took the picture. She was scared stiff of getting bitten or (worse still from our point of view) putting you in danger of death by interfering with your strike. She reports that you were cool, perfectly cool. Just as if it was nothing special to get in there with a death dealing reptile. (In the Far East bigger boas actually eat cats whole but vipers just strike in self defence and kill by poison). Your housekeeper and your human butler, Giles, say that they often find mangled bodies of vipers on the patio.
I am sure that cats everywhere will join me in hearty congratulations on a simply terrific bit of feline hunting. Can any feline beat this?
George
PS. The snake is probably a smooth snake, Coronells austriaca or gironida or maybe a juvenile Western whip snake (Coluber). I'm sure you have had vipers too, Clari. But I thought a little zoological ID would be in order.
Posted by George Online Cat at 9:20 am