William's nose was put right out of joint 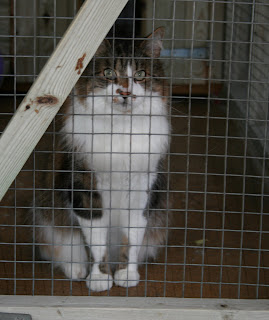 William is not a cool cat. Couldn't be. Not at his age, which is practically an OAP age for cats. (OAP stands for old age pensioner - for cats like Oscar Snuggles across the pond). Only young lean mean hunting machines, preferably black, can be really cool in catdom. Street cred for tabby and white is low, fellow cats. That white and black female next door knew that when she flashed her tummy at me.
William has not been honest about our stay in the cattery. He was frightfully upset by the cat the other side of our chalet, the one in the picture here. He was a look alike - semi long haired tabby and white with markings like W's. Only bigger. Much bigger. Don't let anybody tell you that size doesn't matter. You can't be a cool cat if you are pretty, longhaired and small. Which William is, compared to certain lean black cats. And, worse for him, small compared with the tabby and white next door.
William just tried to ignore him. Then he told me he thought the cat looked like Hitler. Boy, did that show his paranoia. Or it was a pathetic attempt to smear the cat's reputation. Any cat can see for themselves on www.catsthatlooklikehitler.com that Hitler cats have to be black and white. They can't be tabby and white even if they have a small tabby moustache. Tabbies can't do Hitler.
Nor can black rapper street cats. Black is Beautiful. Black Pussycat Power. Slogans for cats... that's another blog entry.
Posted by George Online Cat at 8:37 am