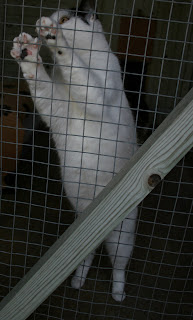 She did it again. Banged us up without mercy for several days. George, for whom I have little time, behaved a bit better this time. He seemed more resigned and spent less time involving me in unworkable silly escape plans that would have made my life in prison even worse than it was. I didn't have to bite Gill the Cattery once, because he didn't set me up to it like last time.
George spent most of his time prancing up and down striking attitudes to impress the white and black cat next door. She seemed pretty unimpressed, I thought. She was bigger - and fatter- than him. I think he found it difficult to accept that a female wasn't interested. Obviously we are all - me, George and her, neutered and therefore on the side lines of the sex war. But there is a frisson of sexuality none the less.
She seemed more impressed by me, I thought. Something in the way she would stretch up full length when she saw me. Some females fancy the older tom. We are calmer, more tolerant, less reactive. I let George strutt his adolescent stuff which included some very rude goggling. I concentrated on more sophisticated eye contact. I didn't stare. Staring is bad mannered as all cats (and a few knowledgeable humans) know. I just did a quick eye flash and then lowered them, as if to say "I am the sort of cat that might be friendly, if you played your cards right." I think we came to an understanding - distant but warm.
There was another neighbour cat. I didn't think much of him. He had a moustache like Hitler. But I must let George have his say.
Posted by George Online Cat at 9:47 am