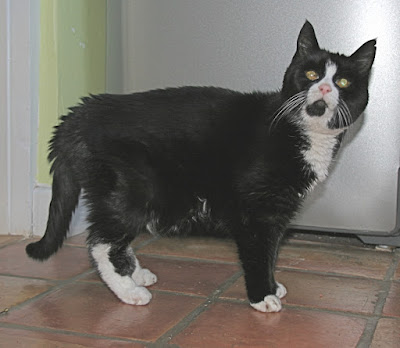 This is my friend, also called George. He is a senior cat. He is happy, and healthy even if he does sleep rather a lot. He's not as sleek as he used to be, as his fur has thinned a bit and he's not good at grooming himself in the difficult parts to reach.

I think his human  should groom him daily, just to get to the areas where he finds grooming rather tricky. She told me that the next time she takes him to the vet, she will ask if he has arthritis that might be painful. It may hurt him to turn his body round to groom his back.

How does she know he is mentally still active and not suffering from dementia?

Check that we oldies are not in pain from arthritis. Keep an eye on our behaviour - if we start behaving abnormally, it could be disease or the beginnings of losing it.

We senior cats need to keep their dignity and wellbeing. Get your owner to read up on elderly cat care

Posted by George Online Cat at 9:32 am