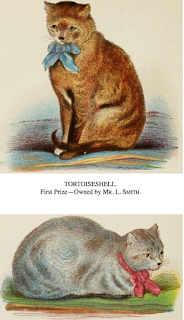 I never thought I would say this but t 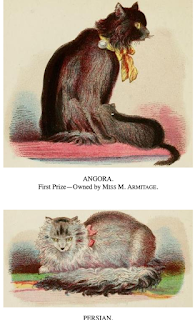 hank goodness for vets. I have been reading an old book about cats, and I am horrified at the medical suggestions. It is Cats: their Points and Characteristics with Curiosities of Cat Life and A Chapter on Feline Ailments, 1876, by W. Gordon Stables, a retired sea doctor who also wrote Medical Life in the Navy.
The illustrations are weird. Did you ever see cats like these? The anecdotes are odd - one about a tom cat on board a ship threatened with being shot by the captain. And there is even an ad for a cat medicine chest (see last illustration). His remedy for diarrhoea is this: 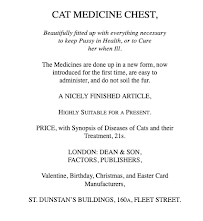 "Begin the treatment by giving the little patient half a small teaspoonful of castor-oil. Give a still smaller dose about six hours after, to which two drops of laudanum or solution of muriate of morphiæ has been added. Afterwards give, three times a day, either a little chalk mixture, with half a drop of laudanum in each dose."
It's castor oil again for bronchitis and a diet of beef tea (sounds good to me) and bread (less good!). For fits, the good doctor suggests holding smelling salts to the feline nose (ugghhhh) and bleeding (uggghhh).. Then there is a disease he calls The Yellows, and suggests a horrible amount of remedies such as glauber salts, bismuth, creasote, aromatic powder and laudanum, which is a mixture of alcohol and morphine, quinine and cod liver oil. 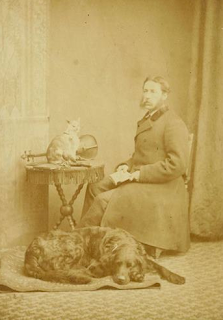 I don't think many cats could have survived this cure, let alone the disease!

So though I hate vets, I think Dr Stables would have been even worse. He had great whiskers, though. Almost as good as mine!