Ouch. It hurts when my human picks me up 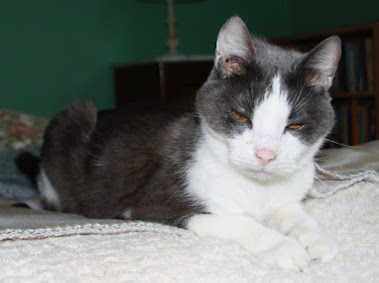 Are you finding that you don't want to jump up on the bed any more? Or feeling that the litter tray is difficult to climb into? Or even beginning to think that going out through the cat flap is just too uncomfortable for you to bother? And when your human picks you up, it hurts, so you nip her.

It's probably arthritis. It begins to hurt when you do anything much, so you spend more time sleeping. Maybe you no longer want to have to tackle the stairs, so instead of walking downstairs to use the litter tray you do it behind the chest of drawers. As any sensible elderly cat would.

Your human doesn't understand. She gets angry. This is the moment to make sure she reads up on the problem here.  It is Arthritis Week for cats.

Last century even vets didn't know that cats got arthritis. We conceal our pain - unlike those despicable whining dogs. We rarely limp and we never whine. We suffer in silence.

Yet there is so much our owners could do. They could make sure that there was a litter tray upstairs as well as downstairs. And they could cut down the front of the litter tray so it is easier to climb in.

There are little ramps that they could buy to help us get on and off the sofa or the bed. A heated bed would be cosy too. They could make sure we had regular painkillers.