Thinking - the history of cat food.

Pondering the cat-human relationship, I have decided it is much improved. Why? While nosing around the book shelves of my human, I came across this small pamphlet, issued by a maker of "Tibs," vitamin pills for cats. It is probably more than half a century old. 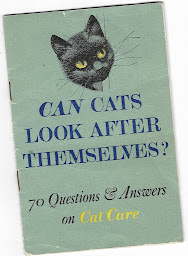 We know that humans are dumb animals. But in the l950s they were even dumber than nowadays when it comes to cats. Some of them thought that kitchen scraps (delightful though they are) were sufficient food for cats. Others believed a bowl of milk was sufficient.
Nowadays we know that cows' milk 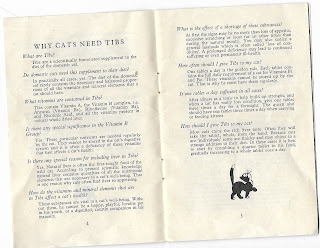 can be very indigestible to many cats. If humans want to feed us milk, they should buy cat milk.  And kitchen scraps (preferably stolen) are no substitute for a bowl of the most expensive kind of cat food. Scraps yes, but as well as not instead of proper cat food!
We also know that cats require some specific ingredients* in their diets - ingredients which are found in a natural diet of rodents but were not found in l950s cat food.
Yes humans are dumb animals but not as dumb as they once were.

* Amino-acids which are taurine, arginine, methionine, and cysteine

Posted by George Online Cat at 9:24 am