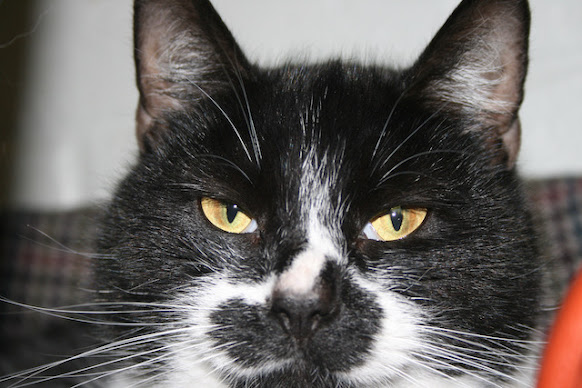 At last.... the White House is becoming truly bi partisan. A cat is on its way. Probably a rescue cat. So that the home of the US President will have both dogs and cats.

One of the disappointments of the Obama presidence was the lack of feline presence. And as for President Trump... he didn't do pets of any kind. As the New Yorker says "there was only room for one authoritarian.

Who will be the First Cat or F.C.OTUS (First Cat of the United States)? Will he or she be able to exert authority over the White House dogs Champ and Major? (Major's record is poor). Another tuxedo cat like Socks? Or black? We don't know yet.

Join me in celebrating the fact that cats will now achieve their rightful position in society.

Here is a list of cats that have achieved the White House with their presidential pets.

Tabby and Dixie  owning  Abraham Lincoln –  Lincoln once remarked that Dixie "is smarter than my whole cabinet.

Blacky and Tiger owning Calvin Coolidge. (He of the rude remark about roosters and hens. Look it up!)

Posted by George Online Cat at 9:42 am 2 comments: 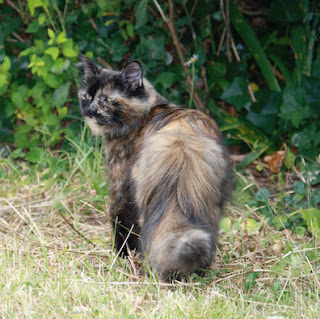 Why do we have tails? Because they are beautiful, of course. Look at these two splendid top tails with their long thick covering of fur. 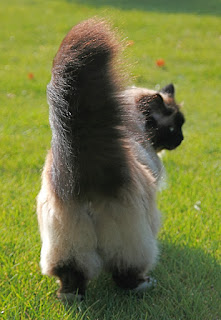 As well as being elegant, they are very useful indeed for balancing and climbing. When we are up a tree we can use our tail as a counterbalance. If we are walking along a narrow wall, for instance, if we lose our balance and our body lurches to the right, our tail will immediately swing to the left to re-balance us.

Cats that have lost their tail in an accident or are born without one like Manx cats, find balancing much harder. For an animal that spends time in trees, it's obvious that the tail is an important help to climbing. 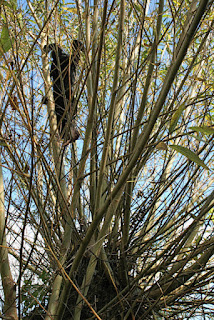 We also use our tail to express our feelings - though that is a different blog.

So what is the anatomy of our tail - well there are somewhere between 19 to 23 vertebrae with six pairs of muscles which can pull the tail from side to side, up and down, and twist it at any point. Compare the dog's tail wagging sideways and moving up and down, but the tail itself just moves from the base. It cannot twist itself half way.

As for humans... no tail at all and therefore about eighteen fewer vertebrae. No wonder they have poor balance, inability to express themselves except by vocalisation.

And a complete lack of elegance.

Our secret language of scent

We can leave messages for other cats, and reminders for ourselves, with a secret language - a specialised scent called a pheromone. This is a chemical emitted from glands in own bodies among other places from our cheek and chin.

Ever thought why we cats rub our chin and cheek against something? We are marking it with this pheromone and with our own ordinary body scent (a kind of signature mix).

It is like a post-it note to ourselves saying "We live here: this is our home and family." Humans cannot smell this at all: nor can they usually see it.

Occasionally, if we have rubbed in the same place for a long time, our human may notice a sort of dark mark. If they are houseproud, they clean it off. This is very upsetting.

So we have to re-mark it all over again. And again.

Posted by George Online Cat at 9:24 am 2 comments:

We hear what you cannot 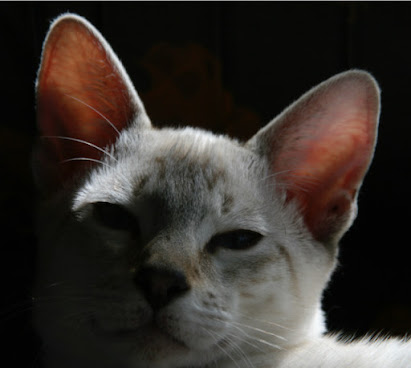 Our world is full of tiny high squeaks, squeals and chirps from little rodents, bats and baby birds. We hear the world differently from humans. You humans can't hear these at all.

We can also hear tiny high pitched buzzing and clicking and creaking noises from machinery - from washing machines, dishwashers, smoke detectors, and maybe even radiators. You think these household machines are silent: they are not to us.

So do us a favour. Don't put the litter tray in the utility room where such machines are active. We want some decent quiet and isolation where we urinate or open our bowels. How would you like to have to use the lavatory in the middle of a busy packing factory or a car repair garage?

You'd hate it. We hate it. So we keep our eliminations to a minimum, which is bad for our kidneys.  Or we just go outside the tray.

Humans, remember this. We can hear what you cannot. 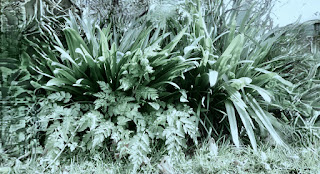 We see the world quite differently from the way humans do. For a start we are so much smaller. Looking at a hedgerow of long grass and foliage  We look at it straight into it (above).  So much better for spotting small rodents! Humans look down on it from their great height (see below) 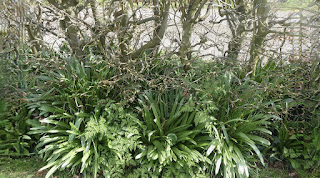 We don't see so much colour. That's because we have far fewer colour-perceiving cells, called cones, in our eyes, than humans do. We can just about see the same three primary colours but only dimly.

And everything we see is blurry compared with human sight. These photos don't show that due to human error! Blurriness is partly because the colours are dim but also because we have traded sharp sight during the day for good sight during the night.

We see in the dark much better than humans do because we have far more light-receiving cells, called rods, in our eyes. We also have bigger curved eyes and bigger pupils than humans.  (Please don't go about poking us in the eye to measure it.) 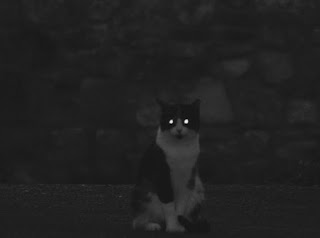 And our eyes glow at night.. because we have a mirror-like tapetum which reflects back the light into the rods, meaning that more light reaches them, though blurry.

That's where we are superior. OK so we can't read The Times but why would we? We can catch mice when they come out in the twilight. Humans can't do that.